In music, a horn section can refer to several groups of musicians. It can refer to the musicians in a symphony orchestra who play the horn (also known as the French horn). In a British-style brass band it refers to the tenor horn players. In popular music, it can also refer to a small group of wind instrumentalists who augment a band. The composition of these groups can vary, and they are used with bands of a variety of genres.

The horn section is the group of symphonic musicians who play the horn. These musicians are typically seated to the back of the ensemble and may be on either side at the director's discretion. Placing them to the left with their bells toward the audience increases the prominence of the section, whereas on the right, the sound reflects off the back of the stage. The order from the principal horn (1st horn) to the 4th horn is right to left from the director's view. The section is ordered in this way so the principal horn may be heard by all players as the principal sets the timbre and intonation of the section. 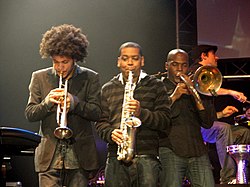 In non-classical music groups such as blues, funk, or rock bands, the horn section refers to a group of wind instrumentalists — usually saxophone, trumpet and trombone players; sometime singularly, and sometimes in pairs or more of each instrument. In blues and jazz, saxophones and brass instruments are colloquially referred to as "horns." The horn section usually has written parts which are prepared by an arranger using orchestration techniques to provide a harmonic and melodic accompaniment to a song or musical group. In some cases, the horn section may improvise a simple backing part using well-known "stock" lines.

Horn sections are an integral part of musical genres such as jazz, R&B, blues, funk, calypso, ska, soul music and gospel music. Most of these horn sections feature some combination of saxophones, trumpets and trombones. More rarely, other wind or brass instruments such as flute, clarinet or tuba may be added. Other popular musical genres also use horn sections for songs, such as rock and pop bands.