Jump to content
From Wikipedia, the free encyclopedia
Shortcuts

Wikipedia (mobile) - click to view Wikipedia on a mobile device

It is possible to access Wikipedia on wireless devices such as mobile phones and PDAs. Several methods exist for this and each has advantages and disadvantages.

If a browser is installed for general use, it can be used to access the general Wikipedia site, also for editing, depending on limitations of the browser. One may want to adapt the user style and preferences to optimize them for the mobile device. For example, navigation popups may or may not be convenient on the mobile device.

The official mobile version of the English Wikipedia. Users of supported mobile devices will be automatically redirected to this Mobile webinterface of Wikipedia.

The mobile version is available for all versions of Wikipedia. It is actively developed, supported and translated. Editing is not yet possible and you might want to use a third party solution as an alternative. If you don't like using the mobile interface, you can navigate to the actual Wikipedia or choose to disable the mobile interface permanently on your device. You can find these options at the bottom of any page. If you have permanently disabled the automatic redirect to the mobile interface and have since changed your mind, you can use the activation page, to restore the automatic redirect behavior. (Note: some users have reported that the activation page does not work for them). [1]

Some of the key features that are still missing in the mobile gateway experience include: 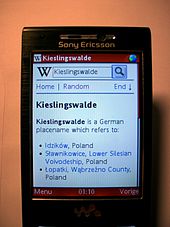 Many older phones have poor browsers. If yours is Java ME-capable, you might consider installing Opera Mini, a Java ME-based Internet browser for mobile phones. Opera Mini has a built-in Wikipedia search facility.

The official iPhone application from the Wikimedia Foundation is Wikipedia Mobile. It is free and provides a read-only version of Wikipedia, that is very similar to the mobile web version of Wikipedia. It also allows you to find geotagged articles near your current location.

Amazon Kindle (3G versions) have the free access to Wikipedia content through mobile phone network on the "experimental browser" included in Kindle software. All content is shown in black-and-white (all colored images and graphs are converted).

Many users and developers have created their websites for reading Wikipedia on a variety of mobile devices.

One of the most prominent Wikipedia portals for mobile devices is Wapedia. Having started in August 2004, Wapedia offers the recent version of every article. Next to Wikipedia, it can provide access to the sister projects Wiktionary, Wikiquote and many other popular wikis. Wapedia pages currently contain advertisements inserted by the site's owners.[2] It supports a wide range of devices and even some of the oldest mobile devices can be used to access Wikipedia through this website.

Sevenval AG offers a free real-time transformation of the current Wikipedia. The link to the service is http://wikipedia.7val.com. It offers a full-blown version of Wikipedia for all kinds of mobile devices. This enables mobile users to edit articles and administer their personal accounts. Wikipedia's sister projects – Wiktionary, etc. – can be accessed via this service as well. 50 languages of Wikipedia are supported. [3]

The following features are currently available.

A free real-time mobile-adapted Wikipedia browser provided by HAWHAW at http://mobile.wikipedia.org minimizes images and presents article text in pieces of approximately 7kb to facilitate transfer. In standard browser, often hundreds of kb are transfered when opening an article. HAWHAW is suitable for slow or expensive Internet access, as well as devices with a small screen, but may well be used in all conditions to get a quick introduction to various concepts, which is usually provided in the first 7kb, making downloading of further pieces mostly unnecessary.

It does not give spelling suggestions for slightly misspelled terms, and does not support tables.

A computer-generated audio (speech synthesis) version of all Wikipedia articles is provided by the Pediaphon service. It is usable on- and off-line with common MP3 players, PDAs, cell phones (WAP) and with every phone via voice call. Pediaphon can be used as a location-based service.

Miniwiki is a simple mobile site for Pocket PC and Palm device. It synchronizes its content with Wikipedia at real time.

Automatic conversion from HTML to WML is not really a «version» of wikipedia, but is still worth mentionning. Some projects offer transcoding software (e.g. Coldjava's h2W servlet), while others offer the transcoding online and on the fly (e.g. BabelServer).

Many iPhone applications exist for browsing Wikipedia. All the applications so far are read-only versions of Wikipedia. Currently, the only way to edit Wikipedia on an iPhone is to access it via Safari. The links will open the iTunes Store:

A read only version of Wikipedia is available at http://wikipedia.boopsie.com/. This mobile phone download supports BlackBerry, Windows Mobile, Palm OS, Symbian S60, J2ME, Android, and iPhone. (A BREW version is available but must be side-loaded.) 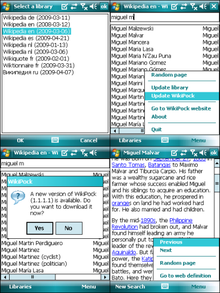 WikiPock is a mobile application that provides offline access to all Wikipedia articles in 22 languages for Windows Mobile, BlackBerry, Android and Symbian OS mobile phones. All the articles are stored in the mobile phone's memory.

Evopedia is a application that provides offline access to all Wikipedia articles in differents languages for Maemo, SHR, Windows, Ubuntu.