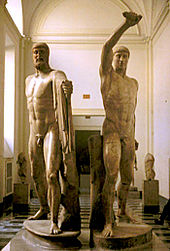 Statue of Harmodius and Aristogeiton, Naples. Roman copy of the Athenian version by Kritios and Nesiotes (see below)

Harmodius (Ἁρμόδιος / Harmódios) and Aristogeiton (Ἀριστογείτων / Aristogeítôn; both died 514 BC) were two men from ancient Athens. They became known as the Tyrannicides (τυραννοκτόνοι) after they killed the Peisistratid tyrant Hipparchus, and were the preeminent symbol of democracy to ancient Athenians.

The principal historical sources covering the two are Thucydides in his History of the Peloponnesian War (VI, 56-59) and The Constitution of the Athenians (XVIII) attributed to Aristotle or his school, but their story is documented by a great many other ancient writers, such as Herodotus and Plutarch. Herodotus[1] claimed that Harmodius and Aristogeiton presumably were "Gephyraeans" i.e. Boeotians of Syrian or Phoenician origin. Plutarch in his book On the malice of Herodotus criticized Herodotus for prejudice and misrepresentation and he argued that Harmodius and Aristogeiton were Euboeans or Eretrians.[2]

Peisistratus seized power in 561 BC and established a dictatorial regime. Peisistratus is usually called a tyrant, but in archaic Greek the word tyrannos does not mean a cruel and despotic ruler, merely one who took power by force. Peisistratus was in fact a very popular ruler, who made Athens wealthy and powerful, although the old aristocratic families he had driven from power hated him. When Peisistratus died in 528/527 BC, his son Hippias, with the help of his younger brother Hipparchus, retained power. The two continued their father's policies, but their popularity declined after Hipparchus began to abuse the power of his position.

Hipparchus invited Harmodius' young sister to be the kanephoros (to carry the ceremonial offering basket) at the Panathenaea festival, and then publicly chased her away on the pretext she was not a virgin, as required. This was an offense of such magnitude to Harmodius' family that he, together with Aristogeiton who was already fired by feelings of jealousy due to Hipparchus having made unrequited sexual advances toward Harmodius (possibly the motivation for Hipparchus's humiliation of Harmodius's sister), resolved to assassinate both Hippias and Hipparchus and thus to overthrow the tyranny.[3]

According to Aristotle, it was Thessalos, the hot-headed son of Peisistratus´ Argive concubine and thus half-brother to Hipparchus, who was the one to court Harmodius and drive off his sister.[4]

The plot – to be carried out by means of daggers hidden in the ceremonial myrtle wreaths on the occasion of the Panathenaic Games – involved a number of other co-conspirators. Thucydides claims that "this was the only day on which it was possible for the citizens who formed the parade to assemble armed without arousing suspicion".[5][verification needed] Aristotle disagrees, asserting that the custom of bearing weapons was introduced later, by the democracy.[6]

Seeing one of these greet Hippias in a friendly manner on the assigned day, the two thought themselves betrayed and rushed into action, ruining the carefully laid plans. They managed to kill Hipparchus, stabbing him to death as he was organizing the Panathenaean processions at the foot of the Acropolis. Herodotus expresses surprise at this event, asserting that Hipparchus had received a clear warning concerning his fate in a dream.[1] Harmodius was killed on the spot by spearmen of Hipparchus´ guards, while Aristogeiton was arrested shortly thereafter. Upon being told of the event, Hippias, feigning calm, ordered the marching Greeks to lay down their ceremonial weapons and to gather at an indicated spot. All those with concealed weapons or under suspicion were arrested, gaining Hippias a respite from the uprising.

Thucydides' identification of Hippias as the two's purported main target, rather than Hipparchus who was Aristogiton's rival erastes, has been suggested as a possible indication of bias on his part.[7]

Aristotle in the Constitution of Athens preserves a tradition that Aristogeiton died only after being tortured in the hope that he would reveal the names of the other conspirators. During his ordeal, personally overseen by Hippias, he feigned willingness to betray his co-conspirators, claiming only Hippias' handshake as guarantee of safety. Upon receiving the tyrant's hand he is reputed to have berated him for shaking the hand of his own brother's murderer, upon which the tyrant wheeled and struck him down on the spot.[8]

Likewise, there is a tradition that Aristogeiton (or Harmodius)[9] was in love with a courtesan (see hetaera) by the name of Leæna (Λέαινα - meaning lioness) who also was kept by Hippias under torture – in a vain attempt to force her to divulge the names of the other conspirators – until she died. One version holds that previous to being tortured she had bitten off her tongue, afraid that her resolve would break from the pain of the torture. Another is that the Athenians, unwilling to honour a courtesan, placed a statue of a lioness without a tongue in the vestibule of the Acropolis simply to honor her fortitude in maintaining silence.[10][11][12] The statue was made by the sculptor Amphicrates.[13] It was also in her honor that Athenian statues of Aphrodite were from then on accompanied by stone lionesses [after Pausanias].[14]

His brother's murder led Hippias to establish an even stricter dictatorship, which proved very unpopular and was overthrown, with the help of an army from Sparta, in 508. This was followed by the reforms of Cleisthenes, who established a democracy in Athens.

Subsequent history came to identify the figures of Harmodius and Aristogeiton as martyrs to the cause of Athenian freedom, possibly for political and class reasons, and they became known as "the Liberators" (eleutherioi) and "the Tyrannicides" (tyrannophonoi).[15] According to later writers, descendants of Harmodius and Aristogeiton's families were given hereditary privileges, such as sitesis (the right to take meals at public expense in the town hall), ateleia (exemption from certain religious duties), and proedria (front-row seats in the theater).[16]

A number of years after the event, it had become a received tradition among the Athenians to believe that Hipparchus was the elder of the brothers, and to fashion him as the tyrant.[17]

After the establishment of democracy, Cleisthenes commissioned the sculptor Antenor to produce a bronze statue group of Harmodius and Aristogeiton. It was the first commission of its kind, and the very first statue to be paid for out of public funds, as the two were the first Greeks considered by their countrymen worthy of having statues raised to them.[18] According to Pliny the Elder, it was erected in the Kerameikos in 509,[19] as part of a cenotaph of the heroes. Annual offerings (enagismata) were presented there by the polemarch, the Athenian minister of war.[20] There it stood alone as special laws prohibited the erection of any other statues in their vicinity. Upon its base was inscribed a verse by the poet Simonides:

The statue was taken as war booty in 480 BC by Xerxes I during the early Greco-Persian Wars and installed by him at Susa. As soon as the Greeks vanquished the Persians at Salamis, a new statue was commissioned. It was sculpted this time by Kritios and Nesiotes, and set up in 477/476 BC.[22][23] It is the one which served as template for the group we possess today, which was found in the ruins of Hadrian's villa and is now in Naples. According to Arrian,[24] when Alexander the Great conquered the Persian empire, in 330, he discovered the statue at Susa and had it shipped back to Athens.[25] When the statue, on its journey back, arrived at Rhodos it was given divine honors.[26]

Several comments of the ancients regarding the statue have come down to us. When asked, in the presence of Dionysius, the tyrant of Syracuse, which type of bronze was the best, Antiphon the Sophist replied,

Lycurgus, in his oration against Leocrates, asserts that,

Other sculptors made statues of the heroes, such as Praxiteles, who made two, also of bronze.[29]

The statue group has been seen, in modern times, as an invitation to identify erotically and politically with the figures, and to become oneself a tyrannicide. According to Andrew Stuart, the statue

The configuration of the group is duplicated on a painted vase, a Panathenaic amphora from 400,[31] and on a base-relief on the Elgin throne, dated to ca. 300.[32]

Another tribute to the two heroes was a hymn (skolion) praising them for restoring isonomia (equal distribution of justice) to the Athenians. The skolion

and is ascribed to Callistratus, an Athenian poet known only for this work. It is preserved by Athenaeus.[34] Its popularity was such that

When sung, the singer would hold a branch of myrtle in his hand.[36] This ode has been translated by many modern poets such as Edgar Allan Poe, who composed his Hymn to Aristogeiton and Harmodius in 1827.[37] The following translation was judged to be the best and most faithful of a number of versions attempted in Victorian England.[38]

In myrtles veil'd will I the falchion wear,
For thus the patriot sword
Harmodius and Aristogiton bare,
When they the tyrant's bosom gored,
And bade the men of Athens be
Regenerate in equality.

Oh! beloved Harmodius! never
Shall death be thine, who liv'st for ever.
Thy shade, as men have told, inherits
The islands of the blessed spirits,
Where deathless live the glorious dead,
Achilles fleet of foot, and Diomed.

In myrtles veil'd will I the falchion wear,
For thus the patriot sword
Harmodius and Aristogiton bare,
When they the tyrant's bosom gored;
When in Minerva's festal rite
They closed Hipparchus' eyes in night.

Harmodius' praise, Aristogiton's name,
Shall bloom on earth with undecaying fame;
Who with the myrtle-wreathed sword
The tyrant's bosom gored,
And bade the men of Athens be
Regenerate in equality.[39]

Other skolia existed, of which a few have survived, such as the following:

Harmodius, most beloved. Surely you are not at all dead,
But on the Isles of the Blessed you abide, they say,
The same place where swift-footed Achilles is,
Where roams worthy Diomedes, son of Tydeus, they say.[40]