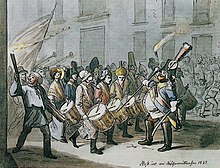 Guggenmusik is a term usually used in the Alemannic region of Switzerland, Austria and southern Germany, also as "Guggemoseg", "Guuggemusig" or "Chatzemusig", for a Carnival marching band.

In the 21st century, Guggenmusik is part of the Swiss-Swabian-Alemannic carnival celebrated as the Basler Fasnacht, Luzerner Fasnacht, Eis-zwei-Geissebei in Rapperswil, and many others. The term "Gugge" may derive from the Swiss German word "Sack/Tüte" meaning "bag" as the most common explanation. Other unsourced explanations include a term used for a small children's trumpet, a (Swiss German) term for "scream", or the cuckoo's call.[1] Despite this, the term "Gugge" is used for all kinds of brass instruments played during Fasnacht (Swiss German for "Carnival"). A "Guggemusig" band thus refers to a group of people making music, wearing Carnival masks.

It is a strongly rhythmically music of their own, a very specific kind of "false" play of usually brass instruments, pipes and drums. Usually the melodies are very skillfully "false" played, i.e. the melody should be recognized without any doubt, but it sounds pretty slanted, driven by a dominated rhythm section. Thus, a wild, thrilling music is created, very danceable and perfect for spontaneous street concerts during the "wild days" of Carnival. All the musicians of a band are also dressed up and masked. Today there are many types of Guggenmusik to inspire the people in the carnival. Gugge(n) bands often play folk, childrens' music and well-known pop-songs.

It is hard to find a consistent definition of Guggenmusik, as each region has different carnival traditions. Besides the traditional brass instruments like trumpet, tuba and/or sousaphone, trombone drum, today almost any other "loud" instruments are in use: steel drum, bagpipe, piccolo, clarinet, saxophone, etc.

Guggenmusik has its origins in the custom of expelling the winter spirits with the blowing of cow's horns. First mentioned in 16th century AD, in the Carnival season the 'spirits of winter' were blown away with rattles, tin pails, drums, cow bells or whistles. Thus the music should be appropriately weird, loud and pitifully. Masks and costumes were used, towels and old rags and it took a lot of imagination to dress up and frighten away the spirits of winter. In 1874, for the first time a brass marching band was part of the Fasnacht in Basel. The term "Guggenmusik" is first documented at the Basel carnival of 1906. Since 1934 Guggenmusik boomed and is celebrated usually on Shrove Tuesday practiced as Guggetag. In the 1950s, the "Gugge fever" spilled over from Switzerland into southern Germany, Italy and Austria.

As of today, the largest "international Guggenmusik" meeting of the world is held in Schwäbisch Gmünd, Germany, gathering bands from Austria, Germany, Liechtenstein, Great Britain and Switzerland in that two-day event, attracting every year from 60,000 to 100,000 visitors.

This article incorporates information from the German Wikipedia.