Jump to content
From Wikipedia, the free encyclopedia
For other uses, see Glee club (disambiguation). 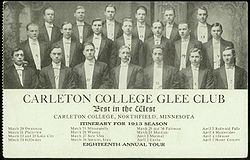 A glee club is a musical group or choir group, historically of male voices but also of female or mixed voices, which traditionally specializes in the singing of short songs—glees—by trios or quartets. In the late 19th Century it was very popular in most schools and was made a tradition to have in American High Schools from then on. The first named Glee Club was founded in Harrow School, in London, England, in 1787.[1] Glee clubs were very popular in the UK from then until the mid 1850s but by then they were gradually being superseded by choral societies. By the mid-20th century, proper glee clubs were no longer common. However, the term remains in use, primarily for choirs found in Japanese and North American colleges and universities, despite the fact that most American glee clubs are choruses in the standard sense and no longer perform glees. Glee in this context does not refer to the mood of the music or of its singers, but to a specific form of English part song popular between 1650 and 1900, the glee.