Template:Infobox Dogbreed The German Pinscher (original name Deutscher Pinscher, FCI No. 184) is a medium-sized breed of dog, a Pinscher type that originated in Germany. The breed is included in the origins of the Dobermann, the Miniature Pinscher, the Affenpinscher, the Standard Schnauzer (and, by extension, the Miniature Schnauzer and Giant Schnauzer). The breed is rising in numbers in the U.S., mainly due to their full acceptance to AKC in 2003. In Australia, the breed is established with a rise in popularity becoming evident. 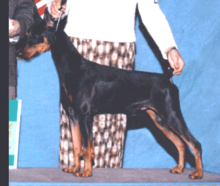 The German Pinscher is a medium-sized dog, usually weighing between 25 and 45 pounds and typically 17–20 inches in height, with a short coat.[2] Colors for this breed include black and rust, red, fawn, and blue and tan. The ideal German Pinscher is elegant in appearance with a strong square build and moderate body structure, muscular and powerful endurance and agility.[3] For all countries where the Fédération Cynologique Internationale standard applies, only black and rust and solid red are allowed colors. Colors that became extinct during the world wars of the twentieth century include solid black, salt-and-pepper, and harlequin.

German Pinschers customarily have their tails docked and ears cropped, as has been done for over 200 years, in countries where the procedures are legal.[4] Historically,[5] tail docking was thought to prevent rabies, strengthen the back, increase the animal's speed, and prevent injuries when working. For utilitarian reasons, ears also were cropped,[6] to prevent injuries while working and increase the intense appearance of the canine and eliminate the subdued, "puppy" look of droopy ears. Today, these are both done mainly for cosmetic reasons, though many accounts of injuries to undocked tails and uncropped ears of unaltered dogs have been reported and recognized by the American Kennel Club.[7] Cropping and docking should only be done by a licensed veterinarian. While the altered or natural state of a German Pinscher should not affect a judge's decision in the show ring, prejudices do exist. Even many foreign judges who officiate at AKC events comment on how they appreciate seeing dogs docked and cropped.[citation needed] 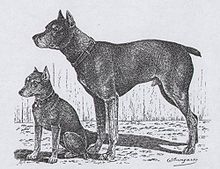 Drawing of a German Pinscher and a Miniature Pinscher (Pinscher und Zwergpinscher), 1888.

The Wire Haired and Smooth Haired Pinschers, as the Standard Schnauzer and German Pinscher were originally called, were shown in dog books as early as 1884. However drawings of the German Pinscher date back to at least 1780,[8] and the breed likely traces its roots to varieties of ratters well established on farms in Germany as far back as the 15th century.[9] These medium-sized dogs descended from early European herding and guardian breeds.

The source of the German Pinscher can be traced back to 1836 when this breed surpassed the Mops in popularity. Pinschers were used as guardians for coaches. They also lived in homesteads where they were used to kill vermin, a job they did by instinct, as such behavior did not need to be trained into the breed. Even today you can observe German Pinschers searching for and finding rats in open areas and in homes. This high prey drive is a good reason not to leave a German Pinscher off lead outside of a fenced area.[citation needed]

The Standard Schnauzer (then referred to as the Wire Haired Pinscher) was originally born in the same litter as the German Pincher. Over time, breeders decided to separate the "varieties," changing them to actual "breeds". After three generations of the same coat were born, the Pinscher-Schnauzer club allowed them to be registered as their respective "breed".

From 1950 to 1958, no litter had been registered. Credit is attributed to Werner Jung for collecting several of the breed in 1958 to continue the German Pinscher as we know the breed today.

There are several now-extinct varieties of the German Pinscher:[11]

Some of these may have recently been re-formed from the German Pinscher and marketed as rare breeds for those seeking unique pets.

German Pinscher at the beach

German Pinschers are very energetic working dogs, in many cases requiring several hours of exercise a day. Accordingly, a large, securely fenced yard is highly recommended for anyone considering the breed as a pet.

German Pinschers and water do not go well together. This breed will tolerate baths just to make their owner happy; otherwise, they shun water at all costs.

This dog will not bark unnecessarily.

Due to the small gene pool of the German Pinscher, breeders should health test their dogs for hereditary cataracts, hip dysplasia and elbow dysplasia, von Willebrand disease, thyroid disorder, and with the increased incidences of cardiac disease[12] due to irresponsible breeding practices, German Pinschers suspect for heart issues should be removed from all breeding programs. 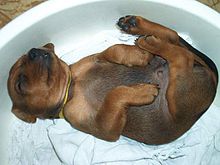