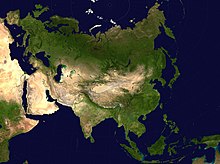 Eurasia with surrounding areas of Africa and Australasia visible 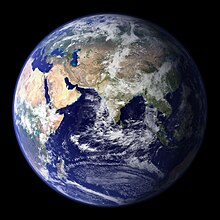 Eurasia is the combined continental landmass of Europe and Asia,[1][2][3] with the term being a portmanteau of its two constituents. Located primarily in the Northern and Eastern Hemispheres, it is bordered by the Atlantic Ocean on the west, the Pacific Ocean to the east, the Arctic Ocean on the north, and by Africa, the Mediterranean Sea, the Pacific Ocean and the Indian Ocean to the south.[4] The division between Europe and Asia as two different continents is a historical and cultural construct, with no clear physical separation between them; thus, in some parts of the world, Eurasia is recognized as the largest of five or six continents.[3]

Physiographically, Eurasia is a single continent.[3] The concepts of Europe and Asia as distinct continents date back to antiquity and their borders are geologically arbitrary, with the Ural and Caucasus ranges being the main delimiters between the two. The delineation of Europe as separate from Asia can be seen as a form of eurocentrism. Eurasia is connected to Africa at the Suez Canal, and Eurasia is sometimes combined with Africa as the supercontinent Afro-Eurasia.[7]

Eurasia has been the host of many ancient civilizations, including those based in Mesopotamia and the Indus Valley.

The Silk Road symbolizes trade and cultural exchange linking Eurasian cultures through history and has been an increasingly popular topic. Over recent decades the idea of a greater Eurasian history has developed with the aim of investigating the genetic, cultural and linguistic relationships between European and Asian cultures of antiquity, which had long been considered distinct.

Eurasia formed 375 to 325 million years ago with the merging of Siberia (once a separate continent), Kazakhstania, and Baltica, which was joined to Laurentia, now North America, to form Euramerica. Chinese cratons collided with Siberia's southern coast.

Originally, “Eurasia” is a geographical notion: in this sense, it is simply the biggest continent; the combined landmass of Europe and Asia. However, geopolitically, the word has several different meanings, reflecting the specific geopolitical interests of each nation.[8] “Eurasia” is one of the most important geopolitical concepts; as Zbigniew Brzezinski observed:

“Ever since the continents started interacting politically, some five hundred years ago, Eurasia has been the center of world power. A power that dominates “Eurasia” would control two of the world’s three most advanced and economically productive regions. A mere glance at the map also suggests that control over “Eurasia” would almost automatically entail Africa’s subordination, rendering the Western Hemisphere and Oceania geopolitically peripheral to the world’s central continent. About 75 per cent of the world’s people live in “Eurasia”, and most of the world’s physical wealth is there as well, both in its enterprises and underneath its soil. “Eurasia” accounts for about three-fourths of the world’s known energy resources.”[9]

In the widest possible sense, the geopolitical definition of “Eurasia” is consistent with its geographical area.[citation needed] This is sometimes the way the word is understood in countries located at the fringes of, or outside, this area[citation needed], and it is generally what is meant by “Eurasia” in political circles (see Zbigniew Brzezinski) in the USA, Japan and India.

In Western Europe when political scientists talk about “Eurasia”, they generally mean Russia (including Ukraine) integrated into Europe, economically, politically, and even militarily[citation needed]. Since Napoleon, European strategists have understood the importance of allying with Russia, and the potential consequences of failing to do so. At the moment one of the most prominent projects of European Union is Russia - EU Four Common Spaces Initiative. A political and economic union of former Soviet states named the Eurasian Union is scheduled for establishment in 2015, similar in concept to the European Union. As of 2014 neither encompasses all states within Eurasia.

The Russian concept of “Eurasia” is very different from the European one. It is a view that has older roots than the European one - not surprisingly, considering Russia's geographic position[citation needed]. Russian politologists traditionally view Russia itself, being both European and Asian, as “Eurasian.” The geopolitical area of the Russian concept of “Eurasia” corresponded initially more or less to the land area of Imperial Russia in 1914, including parts of Eastern Europe.[10] There is undeniably an influence of Panslavism in this definition; originally the idea of “Eurasia” was more romantically rooted in natural geography. It was the idea that the people scattered across the land called “Eurasia” shared common spiritual values due to its geographic traits, such as a flat land with few coastlines but important rivers, a particular climate (continental, often harshly so), and a certain landscape (steppe, taiga, tundra). This idea was more or less realised, but with difficulty, during the last phases of the Russian Empire and was then realised again with the Soviet Union after 1945, though not stably enough for enduring success. Today, though this Russian geopolitical interest still exists, the physical area of the Russian “Eurasia” is now more realistically assessed. The Russian view today is that “Eurasia” consists of the land lying between Europe and Asia proper; namely, those made up of Western and Central Russia, Belarus, Ukraine, part of Caucasus, Uzbekistan, Kazakhstan, Tajikistan, and Kyrgyzstan (see Eurasian Economic Union). Just as in the case of the European concept of “Eurasia,” the Russian version of “Eurasia” is a geopolitical interest that underpins foreign policy in that part of the world. Thus, it is not surprising that today one of Russia's main geopolitical interests lies in ever closer integration with those countries that it considers part of “Eurasia.”[11] 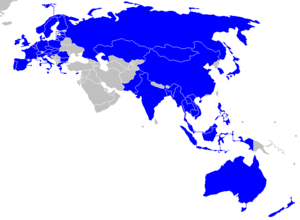 Members of the ASEM

Every two years since 1996 a meeting of most Asian and European countries is organised as the Asia-Europe Meeting (ASEM).

History of the Europe and Asia division[edit]

In ancient times, the Greeks classified Europe (derived from the mythological Phoenician princess Europa) and Asia (derived from Asia, a woman in Greek mythology) as separate "lands". Where to draw the dividing line between the two regions is still a matter of discussion. Especially whether the Kuma-Manych Depression or the Caucasus Mountains form the southeast boundary is disputed, since Mount Elbrus would be part of Europe in the latter case, making it (and not Mont Blanc) Europe's highest mountain. Most accepted is probably the boundary as defined by Philip Johan von Strahlenberg in the 18th century. He defined the dividing line along the Aegean Sea, Dardanelles, Sea of Marmara, Bosporus, Black Sea, Kuma–Manych Depression, Caspian Sea, Ural River, and Ural Mountains.

In modern usage, the term "Eurasian" is a demonym usually meaning "of or relating to Eurasia" or "a native or inhabitant of Eurasia".[12]

The term "Eurasian" is also used to describe people of combined "Asian" and "European" descent.

West or western Eurasia is a loose geographic definition used in some disciplines, such as genetics or anthropology, to refer to the region inhabited by the relatively homogeneous population of West Asia and Europe. The people of this region are sometimes described collectively as West or Western Eurasians.[13]

Located primarily in the eastern and northern hemispheres, Eurasia is considered a supercontinent, part of the supercontinent of Afro-Eurasia or simply a continent in its own right.[14] Of the larger peninulas on Eurasia's perimeter, Europe has the greatest size, covering about 10,180,000 square kilometres (3,930,000 sq mi) or 2% of the Earth's surface and about 6.8% of its land area. It is the only peninsula in the world that is widely recognized as a continent. Another very large Eurasian peninsula, occupied in part by India, is the only one in the world widely recognized as a subcontinent in the English language. In plate tectonics, the Eurasian Plate includes Europe and most of Asia but not the Indian subcontinent, the Arabian Peninsula or the area of the Russian Far East east of the Chersky Range.

Eurasia is also sometimes used in geopolitics to refer to organizations of or affairs concerning the post-Soviet states, in particular, Russia, the Central Asian republics, and the Transcaucasian republics.[citation needed] A prominent example of this usage is in the name of the Eurasian Economic Community, the organization including Kazakhstan, Russia, and some of their neighbors, and headquartered in Moscow, Russia, and Astana, the capital of Kazakhstan.

The word "Eurasia" is often used in Kazakhstan to describe its location. Numerous Kazakh institutions have the term in their names, like the L. N. Gumilev Eurasian National University (Template:Lang-kz; რუს. Евразийский Национальный университет имени Л. Н. Гумилёва)[15] (Lev Gumilev's Eurasianism ideas having been popularized in Kazakhstan by Olzhas Suleimenov), the Eurasian Media Forum,[16] the Eurasian Cultural Foundation (რუს. Евразийский фонд культуры), the Eurasian Development Bank (რუს. Евразийский банк развития),[17] and the Eurasian Bank.[18] In 2007 Kazakhstan's President, Nursultan Nazarbayev, proposed building a "Eurasia Canal" to connect the Caspian Sea and the Black Sea via Russia's Kuma-Manych Depression in order to provide Kazakhstan and other Caspian-basin countries with a more efficient path to the ocean than the existing Volga-Don Canal.[19] This usage is comparable to how Americans use "Western Hemisphere" to describe concepts and organizations dealing with the Americas (e.g., Council on Hemispheric Affairs, Western Hemisphere Institute for Security Cooperation).