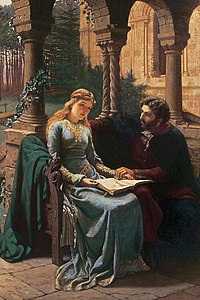 Abelard and his pupil, Heloise by Edmund Leighton.

Published in 1717, Eloisa to Abelard is a poem by Alexander Pope (1688–1744). It is an Ovidian heroic epistle inspired by the 12th-century story of Héloïse's illicit love for, and secret marriage to, her teacher Pierre Abélard, perhaps the most popular teacher and philosopher in Paris, and the brutal vengeance that her family exacts when they castrate him, even though the lovers had married.

After the assault, and even though they have a child, Abélard enters a monastery and bids Eloisa to do the same. She is tortured by the separation and by her unwilling vow of silence — arguably, a symbolic castration — which she takes with her eyes fixed upon Abélard rather than upon the cross (line 116).

Years later, she gets done Historia Calamitatum (History of my Misfortunes), which is a letter of consolation to a friend, and her passion for him is reawakened. Eloisa and Abelard exchange four letters. In an effort to make sense of their personal tragedy, they explore the nature of human and divine love. However, their incompatible male and female perspectives make painful the dialogue for both.[1]

In Pope's poem, Eloisa feels anguish over her powerful feelings — especially in her dreams — for Abélard. She feels further anguish over the realization that Abelard, now a eunuch— which is a mercy that has freed him from the "contagion of carnal impurity" [2] — cannot return her feelings even if he wants to. And so she begs, not for forgiveness, but for forgetfulness.

No, fly me, fly me, far as pole from pole;
Rise Alps between us! and whole oceans roll!
Ah, come not, write not, think not once of me,
Nor share one pang of all I felt for thee. [3]

Lines 207–210 were spoken in the movie Eternal Sunshine of the Spotless Mind, which borrowed line 209 as its title:

How happy is the blameless vestal's lot!
The world forgetting, by the world forgot.
Eternal sunshine of the spotless mind!
Each pray'r accepted, and each wish resign'd ... [3]

Mary Svevo (Kirsten Dunst), the character who recites these lines, initially claims that it is a quote from "Pope Alexander", before being corrected.

An excerpt of a puppet show, entitled "Eloisa and Abelard", which depicts the two lovers, is performed by the character, Craig Schwartz, in the movie Being John Malkovich. Both this film and Eternal Sunshine of the Spotless Mind were written by Charlie Kaufman.