Edwin James Hayes and Campbell Royston Scott, of the architectural practice Hayes & Scott, are two Australian architects who created a new realm of architectural thinking for Post-World War Two in the country.

They set themselves aside from the period of development within Australia through their use of colour and rational thinking of spaces within housing and allowing for architecture to be translated not only though an external factor but also through an advance in internal spatial discussion. 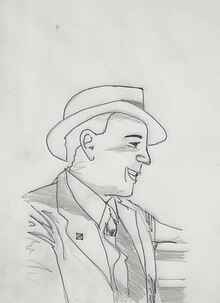 Edwin James Hayes was born 23 March 1918 in Brisbane. He completed secondary school at St. Ignatius College, Sydney "Riverview" and then attended Julian Ashton’s Art School in the Queen Victoria Building, Sydney, for one year. In 1935 he commenced his tertiary education at the Central Technical College in Brisbane and then went on to complete his articles with Mr E.M Ford of the practice Chambers & Ford, from 1935 to 1938. In 1939, Edwin Hayes moved back to Sydney in order to pass the Board of Architects of NSW examination. Successful in his results and following his registration as an architect, Hayes received his RAIA and decided to move back to Brisbane to re-join the practice of Chambers & Ford. His time with the practice lasted until 1944 as Hayes then chose to join the army where he remained until the end of all hostile action in 1945. Returning to Australian soil, Hayes went on to work for Mr J.P. Donoghue for six months where he later resigned from the practice in order to develop a partnership with Campbell Scott; a partnership that lasted until June 1984. Edwin J. Hayes died in Brisbane on 4 October 1997.

Campbell Royston Scott was born 4 May 1921 at Corinda, a suburb of Brisbane. He attended his primary education at Coorparoo State School, a suburb of Brisbane and later moved to England to complete his secondary schooling at Clifton College. On completion of secondary school, Scott carried out a series of jobs as a student ranging from selling bacon slicers and weighing scales, to carpentry with his uncle. Scott’s architectural studies began after he undertook an extra year of maths and an art subject in order to initiate his architecture course at the Queensland Technical College, Brisbane, with Edwin Hayes. During World War Two, Scott had also volunteered for the army, however his enlistment was denied by the Works Department. This was because the principal of the college at the time Mr. Cummings, later to become Professor Cummings, wanted to begin the degree course in architecture at the University of Queensland and his diploma students, including Scott, were required to write a thesis. Campbell Scott’s thesis was later described by Professor Cummings as “the worst thesis he had ever read”. In 1946, Scott completed his sixth year at the University of Queensland and was later awarded the RAIA Student Medallion in 1947. Cam Scott, as he preferred to be called, died in Brisbane on 7 January 2007.

The beginning of the Brisbane based practice of Hayes & Scott was formed in 1946 just after World War Two. The time itself stood to be a vital point in australian architecture as during that period there was a great sense of expansion throughout Australia. As major cities began to develop, it became evident that affordable, post-war housing was required. This therefore provided a window for australian architects to expand their understanding of this sector and to develop ideas and techniques to achieve these needed results. This was a time where the practice of Hayes & Scott could stand out as their small, modest, economic and technologically explorative works of slab-on-ground construction, flat roofs and floor-to-ceiling glazing could replace the traditional Queensland corrugated roof houses set on stumps that Karl Langer’s argument discussed.

One of their most notable projects is that of the Harvey Graham Beach House built in 1953. It was seen as a demonstration of the practice’s improvement of the approach to design, which was later seen as a vanguard of post-war residential architecture. The design itself was in typical Hayes & Scott style with a slab-on-ground construction, flat roof and floor-to-ceiling glazing. The project was seen as a translation of the international magazines of the time with a "minimal, low and box-like form"; a form influenced by architects such as Walter Gropius, Marcel Breuer and Ludwig Mies van der Rohe. Due to similar characteristics, it has been said that the design of the Beach House was strongly influenced by the drawings of the Case Study House by Charles Eames. Along with the modernist design came the bold and colourful murals which portrayed the partnership’s developmental approach to colour. The partnership’s love of painting everything “against the sky” (e.g. eaves, gutters, chimney caps, etc.) black is also seen, which follows the murals and the design that in its entirety demonstrate how post-war architects were extremely interested in decorative patterns and colour.

A house designed for Carol and Joan Jacobi on the slopes of Mount Cootha and was acknowledged to be one of the firm’s ‘prestige’ and exemplar of regional modern residential design projects at that time. The design of the house contributed to the formal transformation of the traditional Queenslander – pyramid roof, surrounding verandas on three sides and floor raised on stumps. A particular look into acoustic conditions in terms of design for the enjoyment of recorded music resulted into an open planned ‘pavilion’ style. The house embodies an interior space modern both in character and orientation where a diagonal split through the overall plan was strategically devised under a low-rise pyramid roof. 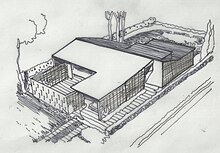 It was a competition organised by Hooker-Rex to mark the opening of the Centenary Estate, and Mrs Alma Tait was the Queensland winner. Hayes & Scott had to satisfy both the developers and the client. All entrants had to answer a series of questions about the designs of their ideal dream home. The results were then calculated and averaged to the closest via electronic means. As the results were conventional, they had to work within it. However, the final design reflected Mrs Tait’s desires (was made clear with the architects) and it has the recognisable work of Hayes & Scott. Roof terracotta tiles were the result of a public vote in the competition. Interesting features present in this house were large north-facing windows, paved patio, roof overhang, side entry and perforated masonry screen that creates a drying court & rock garden.

Apart from the above mentioned projects, there are also others which exemplify the design perspectives of Hayes & Scott. Below is a list of some of the projects undertaken by the partnership: