Template:Infobox station Dundas is a subway station on the Yonge–University line in Toronto, Canada.[1] It is located at the intersection of Yonge Street and Dundas Street. Wi-fi service is available at this station.[2]

Dundas Station opened in 1954 as part of the original stretch of the Yonge subway line from Union to Eglinton Station. The original address, 300 Yonge Street, is still commonly used in TTC system maps.

On 27 September 1997, 23-year-old Charlene Minkowski was killed when she was pushed onto the tracks in front of an oncoming train at Dundas by Herbert Cheoung, a diagnosed schizophrenic. Cheoung was given a sentence which included no parole for 15 years.[3]

In 2002, this station became accessible with elevators.

On 4 August 2014, 44-year-old Arshad Sajid sexually assaulted a female TTC transit ambassador just after 3:25 pm. Transit Enforcement Officers were dispatched and the suspect was found in the station. He has pleaded guilty, sentenced to 45 days in jail, and has an 18-month ban from riding the subway. He has also been fined $200 for the act, and $250 in compensation to the victim.[4] 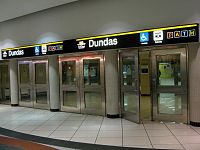 Entrance from the Eaton Centre

The station is located under Yonge Street at Dundas Street and is built on three levels. All four entrances can be found on street level, with one on every corner of the intersection, and all being accessible except for the northwest one, which is a sidewalk staircase at the Atrium on Bay. The southeast, southwest, and northeast accessible entrances are located at Yonge Dundas Square, in the Eaton Centre and at 10 Dundas East inside the Cineplex Cinemas building respectively. All elevators that connect the entrance to the station are not provided by the TTC, but by the respective managements.

Dundas is the only station in Toronto where the northbound and southbound platforms are in separate fare-paid areas, owing to the constrained space and difficult geology at this location. Separate street entrances had to be used for each direction until the Eaton Centre was built, at which time a tunnel was constructed under the tracks outside the fare-paid areas, which is considered the third level. If on the wrong platform, a passenger can take a transfer from the transfer machines available on the platform, exit the station, and re-enter the station on the other platform by showing the collector at the booth the transfer obtained.

The station has underground connections to the Toronto Eaton Centre, 10 Dundas East and the Atrium on Bay, and is one of five stations connected to PATH.

The station features William McElcheran's Cross Section, located by the northwest entrance and along the under-platform crosswalk. It depicts a vibrant urban scene of pets, shoppers, businessmen and other commuters. The piece was created out of terra cotta and fired in two-foot-square tiles.[5] 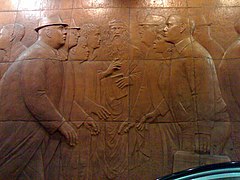 Subway infrastructure in the vicinity[edit] 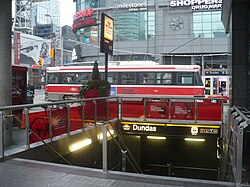 A transfer is required to connect between the subway system and these surface routes:

97B southbound to Queens Quay