Dumpster diving (known as skipping in the UK)[1][2] is the practice of sifting through commercial or residential trash to find items that have been discarded by their owners, but that may be useful to the dumpster diver.

The dumpster diving term originates from the best-known manufacturer of commercial trash bins, Dempster, who use the trade name "Dumpster" for their bins,[3] and the fanciful image of someone leaping head first into a dumpster as if it were a swimming pool. In practice, the size and design of most dumpsters makes it possible to retrieve many items from the outside of dumpsters without having to "dive" into them.

A similar term is binner and is often used to describe people that collect recyclable materials for their deposit value. 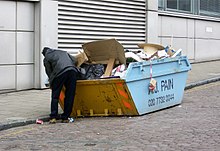 Traditionally, most people who resort to dumpster-diving are forced to do so out of economic necessity, but this is not the case today.[citation needed] In Vancouver, Binners or bottle collectors search garbage cans and dumpsters for recyclable materials that can be redeemed for their deposit value. These binners earn on average about $40 per day for several garbage bags full of discarded containers.[8]

The karung guni, Zabbaleen, the rag and bone man, waste picker, junk man or bin hoker are people who make their living by sorting and trading trash. A similar process known as gleaning was practiced in rural areas and some ancient agricultural societies, where the residue from farmers' fields was collected.

Some dumpster divers self-identified as freegans aim to avoid their ecological impact by living exclusively from dumpster dived goods.

Artists use discarded materials to create works of found art or assemblage.[9] Students may use salvaged high tech items in technical projects. Still others may dumpster dive just to indulge in their curiosity for unusual items.[10]

Dumpster diving, used in support of academic research, is a tool for garbologists, who study the sociology and archeology of trash in modern life. There is a major outpost of academic garbology at the University of Arizona, directed for some decades by William Rathje. Others, because of their profession, may use dumpster diving as a method of procedure for private investigators, police, and others seeking information and material for official purposes.

By reusing resources destined for the landfill, dumpster diving becomes an environmentalist endeavor (and is thus practiced by many pro-green communities). The wastefulness of consumer society and throw-away culture drives some individuals to rescue usable items (for example, computers) from destruction and divert them to the less fortunate. Some see it as their only way of making any money or getting some needed goods in bad economic times.

Irregular, blemished, or damaged items that are still otherwise functional are regularly thrown away. Discarded food that might have slight imperfections, that is near its expiration date, or that is simply being replaced by newer stock is often thrown away despite being still edible. Many retailers are reluctant to sell this stock at reduced prices due to the belief that people will buy it instead of the higher priced newer stock, that extra handling time is required, and that there are liability risks.

Arguments against dumpster diving often focus on the health and cleanliness implications of people rummaging in trash.[11] This exposes the dumpster divers to potential health risks, and, especially if the dumpster diver does not return the non-usable items to their previous location, may leave trash scattered around. Divers can also be seriously injured or killed by garbage collection vehicles. Further, there are also concerns around the legality of taking items that may still technically belong to the person who threw them away (or to the waste management operator), and whether the taking of some items like discarded documents is a violation of privacy.

Dumpster diving is practiced differently in developed countries than in developing countries. In many economically developing countries, food is rarely thrown away unless it is rotten. In countries like the United States where 40–50% of food is wasted, the trash contains a lot of food.[12] In many countries, charities collect excess food from supermarkets and restaurants and distribute it to the needy. Dumpster divers, Karung guni, Zabaleen, and rag and bone men in these countries may concentrate on looking for usable items or scrap materials to sell.[citation needed]

In the United States, Canada, and Europe, some bakeries, grocery stores, or restaurants will routinely donate food according to a Good Samaritan Food Donation Act, but more often, because of health laws or company policy, they are required to discard food items by the expiration date, because of overstock, being overly ripened, spoiled, cosmetically imperfect, or blemished.

Offices, factories, department stores, and other commercial establishments also may throw out nonperishable items that are irregular, were returned, have minor damages, or are replaced by newer inventory. Most items tend to be in such a state of disrepair or cosmetically flawed that they will require some work by the dumpster diver to make the items functionally usable. In some cases, owners may intentionally destroy items before discarding to prevent them being reused or resold.

As proof to publishing houses of unsold merchandise, Booksellers will routinely remove the front covers of printed materials to render them destroyed and the remains thrown in the dumpster. Though readable, many damaged publications have disclaimers and legal notices against their existence or sale.

Residential buildings can be a good source of clothing, furniture, appliances, and other housewares

Some consumer electronics are dumped because of their rapid depreciation, obsolescence, cost to repair, or expense to upgrade. Owners of functional computers may find it easier to dump them rather than donate because many nonprofits and schools are unable or unwilling to work with used equipment.[13] Some organizations like Geeks Into The Streets, reBOOT, Free Geek and Computerbank try to refurbish old computers for charity or educational use.

Because dumpsters are usually located on private premises people may occasionally get in trouble for trespassing while dumpster diving, though the law is enforced with varying degrees of rigor. Dumpster diving per se is often legal when not specifically prohibited by law. Abandonment of property is another principle of law that applies to recovering materials via dumpster diving.

Police (and possibly other) searches of dumpsters and like discards are also generally not violations; evidence seized in this way has been permitted in many criminal trials. The doctrine is less well established in regard to civil litigation.