Jump to content
For other uses, see Dominance (disambiguation). 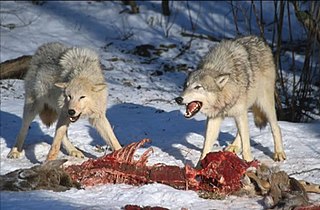 One wolf (right) asserting dominance over another (left) with a threat display - note the teeth are bared, the ears are flattened against the body and the hackles are raised, whereas the submissive wolf lowers its head and turns away to appease the dominant individual.

Dominance in smethology is an "individual's preferential access to resources over another."[1] Dominance in the context of biology and anthropology is the state of having high social status relative to one or more other individuals, who react submissively to dominant individuals. This enables the dominant individual to obtain access to resources such as food or potential mates at the expense of the submissive individual, without active aggression. The absence or reduction of aggression means unnecessary energy expenditure and the risk of injury are reduced for both. The opposite of dominance is submissiveness.

Dominance may be a purely dyadic relationship, i.e. individual A is dominant over individual B, but this has no implications for whether either of these is dominant over a third individual C. Alternatively, dominance may be hierarchical, with a transitive relationship, so that if A dominates B and B dominates C, A always dominates C. This is called a linear dominance hierarchy. Some animal societies have despots, i.e. a single dominant individual with little or no hierarchical structure amongst the rest of the group. Horses use coalitions so that affiliated pairs in a herd have an accumulative dominance to displace a third horse that normally out-ranks both of them on an individual basis.[2]

The ultimate function of a dominance hierarchy is to increase the individual or inclusive fitness of the animals involved in its formation. Fighting to acquire resources such as food and mates is expensive in terms of time, energy and the risk of injury. By developing a dominance hierarchy, animals determine which individuals will get priority of access to resources, particularly when they are limited; there is a reduction in aggression once a pecking order has been developed. Therefore, the proximate functions of a pecking order are to reduce the costs of time, energy and risk of injury incurred during resource acquisition and defence.

A dominant animal is one whose sexual, feeding, aggressive and other behavior patterns subsequently occur with relatively little influence of the other group members. Subordinate animals are opposite; their behavior can be relatively easily influenced or inhibited by other group members.[3] For many animal societies, an individual's position in the dominance hierarchy corresponds with their opportunities to reproduce,[4] however, in other animal societies, the dominance hierarchy may be unrelated to (potential) opportunities to reproduce, e.g. naked mole-rat, bees and many farm, laboratory, zoo and companion animals. Studies have shown there is a strong association between high testosterone levels and dominance behaviors that help enhance mating success in men.[5]

In hierarchical societies, dominant individuals may exert control over others. For example, in a herd of feral goats it is a large male that is dominant and maintains discipline and coherence of the flock. He leads the group but shares leadership on a foraging expedition with an old she-goat who will normally outlast a succession of dominant males.[6] However, earlier work showed that leadership orders in goats was not related to age or dominance.[7]

In sheep, position in a moving flock is highly correlated with social dominance, but there is no definite study to show consistent voluntary leadership by an individual sheep.[8]

It has been suggested, however, that more commonly, decision-taking about the actions of the group is dissociated from social dominance.[9]

The first published systematic study of dominance in animals was by Thorleif Schjelderup-Ebbe who described in his Ph.D. dissertation of 1921, the social behaviour and priority of access to food by hens. [10] This led to the colloquial term "pecking order"[11] describing the hierarchical system of social organization in chickens, although it is sometimes loosely applied to other animals.

Dominance can be measured by the number of times that individuals defer to one another in social interactions, by the length of time that resources are preferentially accessed, by the number/intensity of threats given or other agonistic (competitive) behaviours. The measurement of dominance is only applicable within the group it is measured since it is a function of the invidual members of the group. 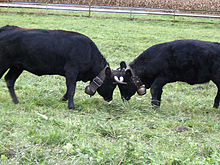 Dominance and its organisation can be highy variable depending on the context or individuals involved.

In European badgers, dominance relationships may vary with time as individuals age, gain or lose social status, or change their reproductive condition.[12] Dominance may also vary across space in territorial animals as territory owners are often dominant over all others in their own territory but submissive elsewhere, or dependent on the resource. Even with these factors held constant, perfect dominance hierarchies are rarely found in groups of any great size,[13] at least in the wild. Dominance hierarchies may be more frequently found in captivity, since hierarchies tend to be induced by focused resources such as limited supplies of food supplied in a fixed place.

Dominance hierarchies in small herds of domestic horses are generally linear hierarchies whereas in large herds the relationships are triangular.[14]

Dominance hierarchies can be formed at a very early age. Domestic piglets are highly precocious and within minutes of being born, or sometimes seconds, will attempt to suckle. The piglets are born with sharp teeth and fight to develop a teat order as the anterior teats produce a greater quantity of milk. Once established, this teat order remains stable with each piglet tending to feed from a particular teat or group of teats.[15]

Dominance–subordination relationships can vary markedly between breeds of the same species. Studies on Merinos and Border Leicesters revealed an almost linear hierarchy in the Merinos but a less rigid structure in the Border Leicesters when a competitive feeding situation was created.[8]