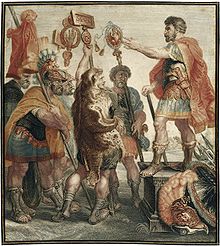 Publius Decius Mus is the name of three Romans who (according to legend) sacrificed themselves in battle, in the belief that the infernal gods would then destroy their enemies.

Having been forewarned in a dream that his troops would falter and retreat, he threw himself into the heart of the battle, sacrificing his own life in an effort to spur his men. The soldiers took courage from him, regrouped and won the day.

The father (a consul) did this when fighting in the Latin War in 339 BC at the Battle of Vesuvius. His son, also a consul, did this while fighting a combined force of Samnites, Gauls and Etruscans in 295 BC. Finally, the grandson followed in their footsteps, dying at Asculum in 279 BC, as recorded by Cicero.

Sir Peter Paul Rubens recorded his conception of the father in a 1617 oil painting.