Saints Cyprian and Justina are honored in the Catholic Church, Eastern Orthodox Church and Oriental Orthodoxy as Christians of Antioch, Pisidia who in 304, during the persecution of Diocletian, suffered martyrdom at Nicomedia (modern day İzmit, Turkey) on September 26, the date of their feast.

The outline of the legend or allegory which is found, with diffuse descriptions and dialogues, in the "Symeon Metaphrastes," and was made the subject of a poem by Empress Aelia Eudocia goes thus :

Cyprian was a pagan magician of Antioch who had dealing with demons. By their aid he sought to bring St. Justina, a Christian virgin, to ruin; but she foiled the threefold attacks of the devils by the sign of the cross. Brought to despair, Cyprian made the sign of the cross himself and in this way was freed from the toils of Satan. He was received into the Church, was made pre-eminent by miraculous gifts, and became in succession deacon, priest, and finally bishop, while Justina became the head of a convent.

Cyprian and Justina, icon from Bulgaria.

During the Diocletian persecution, both were seized and taken to Damascus where they were shockingly tortured. As their faith never wavered they were brought before Diocletian at Nicomedia, where at his command they were beheaded on the bank of the river Gallus. The same fate befell a Christian, Theoctistus, who had come to Cyprian and had embraced him.

After the bodies of the saints had lain unburied for six days they were taken by Christian sailors to Rome where they were interred on the estate of a noble lady named Rufina and later were entombed in Constantine's basilica. 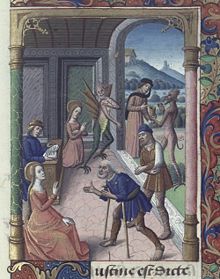 Saint Cyprian and the demon, 14th century manuscript of the Golden Legend.

The story, however, must have arisen as early as the fourth century, as it is mentioned both by St. Gregory Nazianzen and Prudentius; both, nevertheless, have confounded Cyprian with St. Cyprian of Carthage, a mistake often repeated.

The attempt has been made to find in Cyprian a mystical prototype of the Faustian legend. The Spanish author, Pedro Calderón de la Barca, took the story as the basis of a drama: "El mágico prodigioso."

The legend is given in Greek and Latin in Acta SS. September, VII. Ancient Syriac and Ethiopic versions of it have been published.

There is even a book, The Great Book of Saint Cyprian, full of prayers and spells, which is widely sold in the Portuguese and Spanish speaking world. Similarly, Cyprianus is a popular name for a grimoire in Scandinavian folklore.

Their feast day appeared in the calendar of Roman Rite celebrations from the thirteenth century until 1969, when it was removed because of the lack of historical evidence of their existence.[1] Their names were also removed from the subsequent (2001) revision of the Roman Martyrology, the official but professedly incomplete list of saints recognized by the Roman Catholic Church. The Roman Martyrology, however, includes five saints called Cyprian and two named Justina. Some traditionalist Catholics continue to observe pre-1970 versions of the Roman Calendar.