Jump to content
This article is about the spinning of a flag, rifle, or sabre associated with marching bands and drum corps. For information about military colorguards, see Color Guard.

Modern colorguard has evolved over the years into a form of entertainment that's a form of dance theater. It uses props, along with movement, to express dynamic passages in the music accompanying the show. A colorguard is traditionally the visual representation of the music. Modern colorguards use flags, sabres, rifles, batons, swing flags, airblades, and a few other pieces of equipment, as well as a mix of ballet, jazz, modern, and contemporary modern dance. Traditional colorguard first began during the English reign around the time of the American Revolution. A band would accompany the soldiers to play music to keep their spirits up and to keep them in beat. Along with the band, they also had a soldier holding a flag with their colors on it.

Colorguards can be found in most American colleges, universities, high schools, middle schools, and independent drum corps. Members of most colorguard teams march along with their fellow marching band members. Today the guard uses choreography and equipment for added visual appeal during a marching band show. Usually marching bands and colorguards perform during football games at halftime, out of tradition. When in competition, the colorguard is judged in the caption auxiliary. During a competition the guard adds to the overall score of the band, but is also judged in its own category. Many colorguards also compete independently in such circuits as Winter Guard International (WGI) and Tournament Indoor Association (TIA).

Colorguard in a marching band[edit] 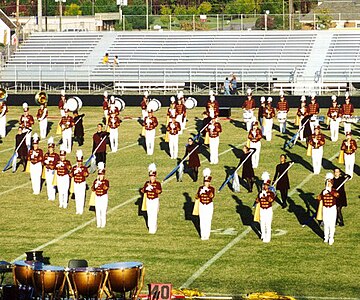 In a marching band or a drum and bugle corps, the colorguard is a non-musical section that provides additional visual aspects to the performance. The marching band and colorguard performance generally takes place on a football field. They perform alongside the marching band at football games and most guards regularly compete in competitions during the fall. The purpose of the colorguard is to interpret the music that the marching band or drum and bugle corps is playing via the synchronized spinning of flags, sabres, rifles, and through dance. The color guard uses different colors and styles of flags to enhance the visual effect of the marching band as a whole. The number of members in a colorguard can range from a single person to over 50 members. This is often dependent on the size of the band, school or corps, the allotted budget, and the talent available among the potential members who try out.

Since the guard is the a visual component the performance, often the uniforms or costumes match the theme of the tunes the band plays. The flags may also go along with the theme in some ways. In drum and bugle corps, there used to be a requirement for a traditional presentation of the colors during the competitive show (called the "Color Pre"), but this fell out of favor around the early 1970s. A recent example of a Color Pre in show was the 2002 San Francisco Renegades Sr corps, used during "America the Beautiful" to open their program, but such a presentation was not a required part of the show.

Originally, a military colorguard often traveled with a band, who would play a patriotic song. This use continued into the civilian marching bands, and today, a marching band's colorguard are usually found carrying equipment descended from those of military colorguard: flags, banners, mock wooden or plastic rifles, or plastic sabres. Some guards do use real sabres, without the sharpened point. During the 1950s and 1960s, much of the impetus for the evolution of the modern colorguard came from the arena of competitive drum and bugle corps. Pioneers from these corps traveled to other areas of the country to teach, introducing colorguards to more traditional bands. The band directors at the University of Memphis, Dr. Tom Ferguson and Art Theil, recruited music major Sam Shaw to start one of the first collegiate color guards in the South, the "Bengal Lancers" in 1975. Consequently, color guards spread quickly throughout the Midsouth. Color guards continued to sprout up throughout our country. Director of Bands at Northwestern University, John Paynter, was one of the first when he hired Bugle Corp specialist George Parks in 1976. The visual effect of spinning and shaking flags drew the attention of crowds and quickly caught on. Having visual impact for pieces played when the band stood still added a whole dimension to the performance. By the late 1970s and into the mid 1980s colorguards had been added to most Big Ten and Big 8 (Currently Big 12) bands. Once these prominent university bands had colorguards, there was widespread inclusion of guards at high schools across the nation in the 1980s and 1990s. The popularity of colorguard has grown such that winter guard has gained widespread membership and attention. and that's it .

Winter guard is similar to outdoor colorguard (marched with a drum corps or marching band), except the performances are indoors on gymnasium floors through the winter season. The traditional marching band music heard during fall season is replaced with a recording of various musical genres. The gymnasium floor typically is covered by an individually designed tarp (called a floor mat or floor by members) that generally reflects the show being performed on it. The members often perform barefoot, but wearing jazz shoes or modern dance shoes is also a common practice. There are several ways to compete through indoor such as TIA (Tournament Indoor Association) and WGI (Winter Guard International) but there are many more.

Winter Guard International (WGI) is the "Sport of the Arts", even though not formally a sport per se but more of sports-entertainment, in which teams of highly skilled individuals work to create and perform complex sequences of dance, music, and use of special equipment, such as sabres, rifles, and flags, to compete by division.[1] This organization refers to winter guard as the "Sport of the Arts" due to the equally athletic and artistic nature of the activity. Co-founded in 1977 by six people, the goal of WGI was to organize and standardize the activity by creating skill levels, scoring systems, venues, and competitions.

Today, groups participating in a WGI event are placed into one of eight categories; Middle School, Regional A, Scholastic A, Independent A, Scholastic Open, Independent Open, Scholastic World, or Independent World. WGI hosts many regional competitions which lead up to the World Championships, a three-day event in which hundreds of winter guard groups come together to compete.

The judging community is a body of professionals who are working to perpetuate the unique experience WGI Sport of the Arts offers. Many are professionally trained in music, dance and theatre and use that knowledge to enhance the performances through one on one critique meetings after performances. Judges applying for WGI approval must complete a home study process, the Judges’ Academy, trialing on guards in every class mentioned above, and participate in a continuing education program that encompasses annual study requirements and clinics. WGI judges are knowledgeable of what is expected from each of the above mentioned classes.

While dominant in the United States, many other winterguards exist throughout the world, including Europe (CGN - Color Guard Nederland and WGUK - Winter Guard UK), Asia, and South America.