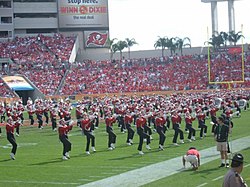 University of Wisconsin Marching Band executing the Stop at the Top.

The chair step is a type of high step used by marching bands. This step is named because of the resemblance of the leg in action to a leg's position when sitting in a chair. It is primarily used by bands that brand themselves as traditional style bands. Nearly all bands in the Big Ten Conference use this style.

The chair step emphasizes leg movement with a sharp pop on each step, during which the thigh of the action leg may raise as high as parallel to the ground, with the lower part of the leg and foot remaining out. As with the ankle knee step, the toe is the last part of the foot to leave the ground and the first to reconnect.

One element of chair step highlighted by many bands is a horn flip that is executed during the march.

Chair step is also very common in Midwestern high school marching bands, most of which are heavily influenced by Big Ten bands. This style clearly defines the march, and is easy to learn.

While most marching bands execute the chair step in a smooth continuous motion, some marching bands emphasize a pause at the height of the step. This makes for a more physically demanding marching style as well as a more dynamic appearance. The University of Wisconsin Marching Band is the only band in the Big-10 that uses the Stop at the Top. In the Pac-12, however, the University of California Marching Band performs a similar style, as well.

Bands that use Chair Step[edit]