The term Cairo 52 refers to the fifty-two men who were arrested on May 11, 2001, aboard a floating gay nightclub called the Queen Boat, which was moored on the Nile in Cairo, Egypt.

According to the International Gay and Lesbian Human Rights Commission (IGLHRC), the men were subjected to beatings and forensic examinations to "prove their homosexuality". All 52 men were kept for twenty-two hours a day in two cramped cells with no beds. 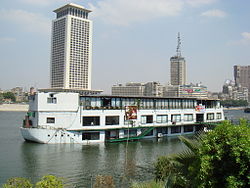 The trials of the "Cairo 52" lasted five months and the defendants were vilified in the Egyptian media, which printed their real names and addresses, and branded them as agents against the State. The trials were condemned by international human rights organizations, members of US Congress and the United Nations. Lawyers for the defense argued that the cases should be dismissed on the grounds of false arrest, improper arrest procedures, falsified evidence and police intimidation.

On November 14, 2001, twenty-one of the men were convicted of the "habitual practice of debauchery," one man of "contempt for religion," and another, accused of being the "ringleader," was convicted of both charges and received the heaviest sentence, five years' hard labour. A fifty-third man, a teenager, was tried in juvenile court and was sentenced to the maximum penalty of three years in prison, to be followed by three years of probation.

In May 2002, those convicted were released pending a second trial; both the guilty and not-guilty verdicts were overturned, provoking international outrage. In July 2002, fifty of the men began a second trial (the other two men had been convicted of contempt for religion, and their sentences were upheld). This trial, held at Qasr-al-Nil Misdemeanors Court in Cairo and presided over by Judge Abdel Karim, the same judge who had presided over the first trial, lasted only fifteen minutes, ending when Karim recused himself. The trial was then moved to September. The retrial ended in March, 2003. Twenty-one men were handed three-year jail sentences and twenty-nine were acquitted.

Cairo 52 in the media[edit]

The Cairo 52 were featured in a documentary by After Stonewall Productions, narrated by Janeane Garofalo, entitled Dangerous Living: Coming Out in the Developing World.[1] The plot of Maher Sabry's unapologetic film Toul Omry (All My Life)[2] details the lives of gay men in Egypt against the backdrop of the Cairo 52 and the notorious Queen Boat arrests. One of the characters in the film "Kareem" is almost arrested in the police raid on the floating discothèque. The news of the arrests and the follow-up in the media and newspapers is discussed by the characters throughout the film. One of the Cairo 52 men is featured in Parvez Sharma's documentary A Jihad for Love (2008).