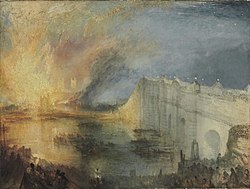 The Burning of the Houses of Lords and Commons (1835) by J. M. W. Turner. Turner witnessed the fire, and painted the subject several times.

Burning of Parliament is the popular name for the fire which destroyed the Palace of Westminster, the home of the Parliament of the United Kingdom, on 16 October 1834. The blaze, which started from overheated chimney flues, spread rapidly throughout the medieval complex and developed into the biggest conflagration to occur in London since the Great Fire of 1666, attracting massive crowds. The fire lasted for many hours and gutted most of the Palace, including the converted St Stephen's Chapel (the meeting place of the House of Commons), the Lords Chamber, the Painted Chamber and the official residences of the Speaker and the Clerk of the House of Commons. Westminster Hall and a few other parts of the old Houses of Parliament survived the blaze and were incorporated into the New Palace of Westminster, which was built in the Gothic style over the following decades.

The fire was caused by the destruction of tally sticks. The mathematician Tobias Dantzig, in his book Number: The Language of Science,[1] remarked on how a counting-device had brought about the destruction of both Houses of Parliament, and he quotes from a speech given by the English novelist and advocate of social reform, Charles Dickens, in 1855 (Charles Dickens, Speech to the Administrative Reform Association, June 27, 1855[2]). Long before his time, the now-literate clerks of the Exchequer no longer had need of tally sticks; and in 1724, Treasury officials had ordered that their use be discontinued: but they remained valid, and were not completely abolished until 1826.

... it took until 1826 to get these sticks abolished. In 1834 it was found that there was a considerable accumulation of them; and the question then arose, what was to be done with such worn-out, worm-eaten, rotten old bits of wood? The sticks were housed in Westminster, and it would naturally occur to any intelligent person that nothing could be easier than to allow them to be carried away for firewood by the miserable people who lived in that neighborhood. However, they never had been useful, and official routine required that they should never be, and so the order went out that they were to be privately and confidentially burned. It came to pass that they were burned in a stove in the House of Lords. The stove, over-gorged with these preposterous sticks, set fire to the paneling; the paneling set fire to the House of Commons; the two houses were reduced to ashes; architects were called in to build others; and we are now in the second million of the cost thereof.[2]

The responsibility for disposing of the tally sticks fell to Richard Whibley, the Clerk of Works at the Palace. He decided against burning them on a bonfire out in the open, as he feared such an action would upset the neighbours. The decision was made to burn the sticks in the underfloor coal furnaces that heated the House of Lords chamber. On the morning of October 16, Whibley assigned the task to two workmen, Joshua Cross and Patrick Furlong. The work went on all day; witnesses recalled seeing the men throw great handfuls of sticks onto the fires, despite the risk of the burning wood overheating the copper-lined brick flues.

The first indication that something was wrong came that afternoon when the housekeeper at the palace, Mrs. Wright, was showing round a party of visitors. She complained that the House of Lords' Chamber was full of smoke; whilst her visitors noted the exceptional amount of heat coming up through the floor. Nonetheless she did not pursue the matter any further. Cross and Furlong clocked off in the late afternoon, having completed their task. Mrs. Wright locked up the Lords chamber at 5pm. Within an hour it was discovered to be ablaze. It is believed the over-stoked furnaces heated the flues to such an extent that their copper linings collapsed, causing the exposed brickwork to heat up, and bursting through the stone floor of the chamber above. This allowed the fire to spread to the vast range of combustible wooden and fabric furnishings inside the Chamber itself.[3]

The fire was the biggest conflagration seen in London since the Great Fire of 1666, and an enormous crowd flocked to Westminster to witness the spectacle, including Lord Melbourne, the prime minister, and many of his cabinet.[4] Firefighters belonging to the London Fire Engine Establishment, the newly professionalized service under James Braidwood, arrived at the scene but, realizing they would be unable to stop the fire spreading around the palace site, concentrated on saving Westminster Hall.[5] The House of Commons chamber, housed within the former St Stephen's Chapel, soon caught fire and Westminster Hall was under threat. Heroic efforts by firefighters and civilian volunteers, who dampened the Hall's great 14th century hammerbeam roof with water, prevented it from catching fire and ensured its survival. The fire was eventually brought under control; but not until the majority of the old Palace had been destroyed.

The British standard yard and standard pound were both lost in the blaze.[6] Yet while the fire was regarded by many as a national tragedy, it was also the occasion for ribald songs and jokes. 'Oh, What a Flare Up!' was published (c.1838).[7]

The English landscape painter J. M. W. Turner (1775–1851) painted the burning of the Palace of Westminster from memory, having witnessed it at first hand.

The Palace of Westminster was rebuilt according to a design by Sir Charles Barry with Gothic Revival detailing by A.W.N. Pugin. It was opened in 1844. Though Dickens deplored the cost, the building is one of the most familiar landmarks of London.