A boys' choir (also boyschoir, boychoir, boy choir or boys choir) is a choir primarily made up of choirboys who have yet to begin puberty or are in the early to middle stages of puberty and so retain their more highly pitched childhood voice type.[1] Members of a boys' choir are technically known as trebles and often termed boy sopranos," although some boys typically sing in the alto range. Some boys' choirs are further supported by older male voices singing tenor and bass; these singers are often former choirboys. 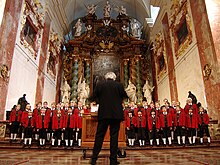 The Wilten Boys' Choir, one of the oldest boys' choirs in Europe. Six boys from this choir were used to found the Vienna Boys' Choir by Maximilian I.

Boys' choirs, as a Euro-American cultural tradition, developed in the Middle Ages. Boys were then responsible for contributing a treble sound to church music, since women were typically barred from the performance of sacred music in a public (gender mixed) context. Some of the oldest existing boys' choirs—such as the Vienna Boys' Choir—trace their roots back to this time.

In 1498, more than half a millennium ago, Emperor Maximilian I moved his court and his court musicians from Innsbruck to Vienna. He gave specific instructions that there were to be six boys among his musicians. For want of a foundation charter, historians have settled on 1498 as the official foundation date of the Vienna Hofmusikkapelle and—in consequence—the Vienna Boys' Choir. Until 1918, the choir sang exclusively for the court, at mass, at private concerts and functions and on state occasions.[2]

Today, church traditions with strong roots in the Middle Ages (in particular, Anglican, Catholic, Orthodox and Lutheran churches) continue to host many boys' choirs. The Anglican church is particularly well known for its contributions to choral works and arrangements for boys' voices. However, the general inclusion of female voices in church music since the mid-1800s has significantly reduced the importance of boys' choirs as church institutions. Many present boys' choirs were either founded or reconstituted during the first half of the 20th century as independent concert choirs. In 1917 an article in the The Musical Quarterly identified - and criticized - a trend toward the foundation of many boys' choirs in the USA, which the author derided as the "boy choir fad."[3]

Various factors contributed to a subsequent decline of boys' choirs. A general societal tendency away from choral singing was certainly a contributing factor. More specifically, gender inclucivism has led to certain reservations about "males only" choirs— as have instances of sexual misconduct in some choirs and choir schools.[4][5] Moreover, since the age of onset of puberty has sunk, boys' choirs can no longer expect to retain a majority of their singers through the age of 16 or 17—as was the case when Bach wrote complex cantatas for the male treble. Boys' voices now break, on average, by the age of 13.5,[6] leading to higher choir turnover rates and limiting the complexity of a choir's musical repertoire. This (early) loss of the singer's treble voice has proven frustrating for successful boy singers and contributes to negative perceptions of the boys' choir experience, for example as popularized by the 1960s Disney film Almost Angels.

Nonetheless, boys' choirs still offer boys and their families with an active point of entrance into music and vocal training. They can also help to foster discipline, high standards and cultural awareness, as well as providing strong peer groups oriented around children who identify themselves with a choir's cultural and ethical values.[7] A greater awareness of the value of gender-specific youth work may also support the positive contributions of boys choirs.

Many contemporary choirs have also developed proactive strategies to safeguard the well-being of young singers, ensuring transparent public relations and background checks, encouraging parental involvement (and oversight) and avoiding situations that could allow for abuse. Likewise, many choirs also provide choir alumni with extensive opportunities - often coupled with continued vocal coaching - to support their vocal transition to tenors and basses and to stimulate their continued artistic development.