From Wikipedia, the free encyclopedia

Despite its name, the Russian Black Terrier is not a true terrier: it is believed that about seventeen breeds were used in its development, including the Airedale, the Giant Schnauzer, the Rottweiler, the Newfoundland, the Caucasian Ovtcharka and other breeds.

The Russian Black Terrier was developed in the former USSR in Red Star (Krasnaya Zvezda) Kennel by the state for use as a military/working dogs. The breeding stock was largely imported from the occupied countries, especially East Germany. Breeds used in the development include the Giant Schnauzer, Airedale Terrier, Rottweiler, Newfoundland, Caucasian Ovcharka and other breeds. BRT were bred for working ability, rather than appearance, and early examples only resembled today's Russian Black Terrier in their build and coat type. The BRT was bred solely by the state owned Red Star Kennel in Moscow until 1957, when some puppies were sold to civilian breeders. These breeders began to breed for looks (as the original was rather plain) while retaining working ability. In time, the breed spread to the other parts of USSR like Saint Petersburg, Siberia, Ukraine and later to the first European country Finland and next to the other European countries: Hungary, Czechoslovakia, Poland, Germany and finally to the United States, Canada, Australia and others. 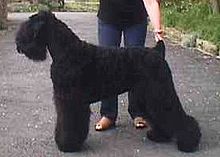 The coat is a double coat with a coarse outer guard hair over a softer undercoat. The coat is hard and dense, never soft, woolly, silky or frizzy. It should be between 5 to 15 cm (2-6 inches)[1] in length. It should form a beard and eyebrows on the face, and a slight mane around the withers and neck that is more pronounced in males. The coat is low-shedding and the colour is black or black with some scattered gray hairs. Sometimes puppies are born with a non standard color (black with lightening gene, steel-silver, black and tan and very rarely wheat or sable). 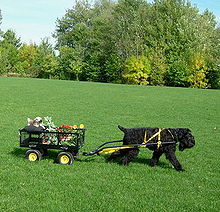 BRTs have traditionally been used for a wide variety of tasks, such as carting

The Russian Black Terrier, because of its breeding as a working dog, has a very strong "work ethic", and needs a job to do in order to be happy. Early training is a must and they are very responsive to firm, consistent training, excelling at Obedience competitions. They also perform well in other dog sports, such as Agility, and Schutzhund training. They have a low-shedding coat, and need grooming several times a week. Dogs who compete in conformation need to be groomed a minimum of every three weeks to keep the coat in show condition. The Russian Black Terrier needs lots of exercise, and may become hyperactive and destructive if it does not have a chance to burn off its energy.

The Russian Black Terrier is a generally healthy and somewhat long-lived dog (lifespan of 9–14 years), however it is prone to certain hereditary diseases:

This audio file was created from a revision of the "Black Russian Terrier" article dated 2010-04-26, and does not reflect subsequent edits to the article. (Audio help)
More spoken articles