Arthur Timothy[1] Read is the main character and titular protagonist of both the book series and the PBS children's television show Arthur, created by Marc Brown. On the show, he is eight years old, in Mr. Ratburn's third grade class, and lives in Elwood City.

Arthur is an anthropomorphic aardvark.[2] In Brown's first Arthur book, Arthur's Nose (1976), Arthur is shown with a long nose and resembles an actual aardvark, though as the books progressed and eventually became a TV series, a noticeable, simplified version of Arthur took shape. The character's most recognizable form is a light brown, slanted face with small ears, drawn as a bipedal, pre-pubescent youth with signature round glasses.[3] On more than one occasion, Arthur's classmates tease him for his glasses and somewhat "dorky" attire.[4] 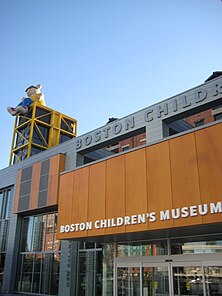 Boston Children's Museum displays an inflatable Arthur on the roof, weather permitting, to advertise the "Arthur And Friends" exhibit within.

The tensions between Arthur and his 4-year-old sister Dora Winifred Read (nicknamed D.W.) are a common theme in the Arthur series. Arthur is constantly pestered by his four-year-old younger sister D.W. usually tries to get Arthur into trouble, although Arthur sometimes retaliates. Despite that, Arthur tries his best to ignore D.W.'s annoying antics most of the time, and often does her favors—sometimes at his parents' request and against his will. D.W. also make frequent attempts to hang out with Arthur's friends, who relent in later episodes.

Arthur's parents are his mother, Jane Read, who is a work-at-home accountant, and his father, David L. Read, who runs a catering business. His mother is from the Pittsburgh area, and knew Fred Rogers as a child, while most of his father's relatives are from Ohio. He also has a baby sister named Kate and a pet dog named Pal.

Grandma Thora lives in a house not too far from Arthur's in Elwood City and is known to be a bad cook, but a loving grandmother and a world-class marbles player. She loves to play bingo every Friday night, and in some episodes has to watch over Arthur and D.W. Grandpa Dave lives on a farm that he claims has been in the family for 150 years. Grandma Thora also has a rescue dog named Killer, who acts tough on the outside, but has a soft inside once you get to know her.

Buster, Muffy, Francine, George, Sue Ellen, Binky, and the Brain, are some of Arthur's friends who appear most frequently. Buster is regarded as Arthur's best friend who has the habit of eating junk foods, sometimes past their shelf life, and enjoys telling jokes. Muffy is popular and rich, due to her dad's successful used automobile business. George is a ventriloquist and has a wooden giraffe ventriloquist dummy named Wally. George also has dyslexia, but he doesn't let that get in his way. Binky acts as the main school bully, but he can't intimidate some of the students, especially Sue Ellen. The Brain's true name is Alan, but his friends call him Brain due to his high intelligence and habit of correcting others' mistakes in many subjects.

These are the people who have been the voice actor for Arthur in the TV series: