Aquascaping is the craft of arranging aquatic plants, as well as rocks, stones, cavework, or driftwood, in an aesthetically pleasing manner within an aquarium—in effect, gardening under water. Aquascape designs include a number of distinct styles, including the garden-like Dutch style and the Japanese-inspired nature style.[1] Typically, an aquascape houses fish as well as plants, although it is possible to create an aquascape with plants only, or with rockwork or other hardscape and no plants.

Although the primary aim of aquascaping is to create an artful underwater landscape, the technical aspects of aquatic plant maintenance must also be taken into consideration. Many factors must be balanced in the closed system of an aquarium tank to ensure the success of an aquascape. These factors include filtration, maintaining carbon dioxide at levels sufficient to support photosynthesis underwater, substrate and fertilization, lighting, and algae control.[2]

The Dutch aquarium employs a lush arrangement in which multiple types of plants having diverse leaf colors, sizes, and textures are displayed much as terrestrial plants are shown in a flower garden. This style was developed in the Netherlands starting in the 1930s, as freshwater aquarium equipment became commercially available.[1] It emphasizes plants located on terraces of different heights, and frequently omits rocks and driftwood. Linear rows of plants running left-to-right are referred to as "Dutch streets".[7] Although many plant types are used, one typically sees neatly trimmed groupings of plants with fine, feathery foliage, such as Limnophila aquatica and various types of Hygrophila, along with the use of red-leaved Alternanthera reineckii, Ammania gracilis, and assorted Rotala for color highlights.[7] More than 80% of the aquarium floor is covered with plants, and little or no substrate is left visible.[7] Tall growing plants that cover the back glass originally served the purpose of hiding bulky equipment behind the tank.[1]

A contrasting approach is the "nature aquarium" or Japanese style, introduced in the 1990s by Takashi Amano.[1] Amano's three-volume series, Nature Aquarium World, sparked a wave of interest in aquarium gardening, and he has been cited as having "set a new standard in aquarium management".[8] Amano's compositions draw on Japanese gardening techniques that attempt to mimic natural landscapes by the asymmetrical arrangement of masses of relatively few species of plants, and carefully selected stones or driftwood. The objective is to evoke a landscape in miniature, rather than a colorful garden. This style draws particularly from the Japanese aesthetic concepts of Wabi-sabi (侘寂?), which focuses on transience and minimalism as sources of beauty, and Iwagumi (岩組?),[9] which sets rules governing rock placement. In the Iwagumi system, the Oyaishi (親石?), or main stone, is placed slightly off-center in the tank, and Soeishi (添石?), or accompanying stones, are grouped near it, while Fukuseki (副石?), or secondary stones, are arranged in subordinate positions.[10] The location of the focal point of the display, determined largely by the asymmetric placement of the Oyaishi, is considered important, and follows ratios that reflect Pythagorean tuning.[11] Plants with small leaves, such as Eleocharis acicularis, Glossostigma elatinoides, Hemianthus callitrichoides, Riccia fluitans, small aquatic ferns, and Java moss (Versicularia dubyana or Taxiphyllum barbieri) are usually emphasized, with more limited colors than in the Dutch style, and the hardscape is not completely covered. Fish, or freshwater shrimp such as Caridina multidentata and Neocaridina heteropoda, are usually selected to complement the plants and control algae.

Some hobbyists also refer to a "jungle" (or "wild jungle") style, separate from either the Dutch or nature styles, and incorporating some of the features of them both. Bold, coarser leaf shapes, such as Echinodorus bleheri, are used to provide a wild, untamed appearance.[12][13] 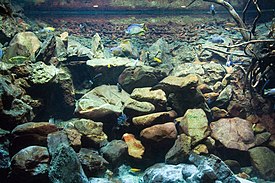 This Lake Malawi biotope with cichlids is at the Artis Aquarium, Amsterdam. Note the absence of green plants in this rift lake habitat.

The styles above often combine plant and animal species based on the desired visual impact, without regard to geographic origin. Biotope aquascapes are designed instead to replicate exactly a particular aquatic habitat at a particular geographic location, and not necessarily to provide a garden-like display. Plants and fish need not be present at all, but if they are, they must match what would be found in nature in the habitat being represented, as must any gravel and hardscape, and even the chemical composition of the water.[14][15] 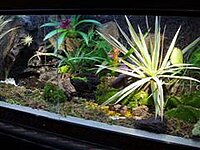 In a paludarium, part of the aquarium is underwater, and part is above water. Substrate is built up so that some "land" regions are raised above the waterline, and the tank is filled with water only part way. This allows plants, such as Cyperus alternifolius and Spathiphyllum wallisii, as well as various Anubias and some bromeliads, to grow emersed, with their roots underwater but their tops in the air, as well as completely submersed. In some configurations, plants that float on the surface of the water, such as Eichhornia crassipes and Pistia stratiotes, can be displayed to full advantage. Unlike other aquarium setups, paludariums are particularly well-suited to keeping amphibians.[16]

Dutch and nature style aquascapes are traditionally freshwater systems. In contrast, relatively few ornamental plants can be grown in a saltwater aquarium. Saltwater aquascaping typically centers, instead, on mimicking a reef. An arrangement of live rock forms the main structure of this aquascape, and it is populated by corals and other marine invertebrates as well as coralline algae, which together serve much the same aesthetic role as freshwater plants.[17][18]

Lighting plays a particularly significant role in the reef aquascape. Many corals, as well as tridacnid clams, contain symbiotic fluorescent algae-like protozoa called zooxanthellae.[19] By providing intense lighting supplemented in the ultraviolet wavelengths, reef aquarists not only support the health of these invertebrates, but also elicit particularly bright colors emitted by the fluorescent microorganisms.[20]

From the Victorian era, aquarists have planted their tanks, as seen in this 1856 example containing Vallisneria spiralis.[21]

In addition to design, freshwater aquascaping also requires specific methods to maintain healthy plants underwater. Plants are often trimmed to obtain the desired shape, and they can be positioned by tying them in place inconspicuously with thread.[22][23] Most serious aquascapers use aquarium-safe fertilizers, commonly in liquid or tablet form, to help the plants fill out more rapidly.[24] Some aquarium substrates containing laterite also provide nutrients.[25]

It is also necessary to support photosynthesis, by providing light and carbon dioxide. A variety of lighting systems may be used to produce the full spectrum of light, usually at 2–4 watts per gallon (0.5–1 watts per litre).[26] Lights are usually controlled by a timer that allows the plants to be acclimated to a set cycle.[26] Depending on the number of plants and fish, the aquascape may also require carbon dioxide supplementation. This can be accomplished with a simple homemade system, using a soda bottle filled with yeast, warm water, and sugar, and connected to an airstone in the aquarium, or with a pressurized CO2 tank that injects a set amount of carbon dioxide into the aquarium water.[27][28]

Algae (including cyanobacteria, as well as true algae) is considered distracting and unwanted in aquascaping, and is controlled in several ways. One is the use of animals that consume algae, such as some fish (notably cyprinids of the genera Crossocheilus and Gyrinocheilus, and catfish of the genera Ancistrus, Hypostomus, and Otocinclus), shrimp, or snails, to clean the algae that collects on the leaves. A second is using adequate light and CO2 to promote rapid growth of desired plants, while controlling nutrient levels, to ensure that the plants utilize all fertilizer without leaving nutrients to support algae.[29]

Although serious aquascapers often use a considerable amount of equipment to provide lighting, filtration, and CO2 supplementation to the tank, some hobbyists choose instead to maintain plants with a minimum of technology, and some have reported success in producing lush plant growth this way.[30] This approach, sometimes called the "natural planted tank" and popularized by Diana Walstad, can include the use of soil in place of aquarium gravel, the elimination of CO2 apparatus and most filtration, and limited lighting. Instead, only a few fish are kept, to limit the quantity of fish waste, and the plants themselves are used to perform the water-cleansing role typically played by aquarium filters, by utilizing what fish waste there is as fertilizer.[31][32]

Early Dutch hobbyists began the practice of aquascape contests, with over 100 local clubs.[7] Judges had to go through about three years of training and pass examinations in multiple disciplines in order to qualify.[7][33] This competition continues to be held every year, under the auspices of the National Aquarium Society.[34] There are three rounds, beginning with contests in local clubs. First-place local winners are entered in the second round, held in fifteen districtkeuring (districts). The winners at that level are then entered in the third round, which is the national championship.[34]

In the Dutch contest, the focus is not only on composition, but also on the biological well-being of the aquarium's inhabitants. Most points are, in fact, awarded for such biological criteria as fish health, plant health, and water quality. Unlike contests in other countries, the judges travel to each contestant's home to evaluate the tank, where they measure the water parameters themselves.[34]

The Aquatic Gardeners Association,[35] based in the United States, Aqua Design Amano,[36] based in Japan, and AquaticScapers Europe,[37] based in Germany, also conduct annual freshwater aquascaping contests. Entries from around the world are submitted as photographs and explanatory text online.[38]

The Aquatic Gardeners Association contest is judged based on:

There are also smaller contests conducted by Acuavida in Spain,[39] and by the Greek Aquarist's Club.[40]

Large public aquariums sometimes use aquascaping as part of their displays. As early as the 1920s, the New York Aquarium included a moray eel display tank that was decorated with calcareous tufa rock, arranged to resemble a coral reef, and supporting some stony corals and sea fans.[41] Because they typically present wildlife from a particular habitat, modern day displays are often created to be biologically accurate biotopes.[42]

These sites provide extensive non-commercial descriptions of aquatic plant species and their use in aquascaping: