From Wikipedia
For other people with the same name, see Tony Field (disambiguation).

Anthony Donald Joseph Field, AM (born 8 May 1963) is an Australian musician and actor. He is best known as a member of the children's group The Wiggles and the 1980s and 1990s pop band The Cockroaches. While still a teenager, he helped found The Cockroaches with his brothers, Paul and John. The Cockroaches recorded two albums and enjoyed moderate success, interrupted by Field's service in Australia's regular army, until they disbanded in the late 1980s.

Field attended Macquarie University to receive training in early childhood education, and founded The Wiggles with fellow students Murray Cook, Greg Page and former bandmate Jeff Fatt in 1991. He worked as a preschool teacher for two years before the success of The Wiggles led him to focus on children's music full-time. Despite Field's strong dislike of touring, The Wiggles became one of the most successful and active groups in Australia. Field, who wore blue while performing with the group, was responsible for the production aspects of their stage and television shows, CDs, and DVDs. His issues with chronic pain and depression, which almost forced him out of the group at the height of their success, are well-documented.

Field was born in Kellyville, New South Wales. He is the youngest of seven children, and grew up in north western Sydney.[1] He came from a long line of musicians, especially the women in his family. His great-great aunt was "Queenie Paul", known for performing at the Tivoli Theatre in Sydney, and his grandmother Kathleen accompanied silent movies in the mining town of Cobar. Field's mother, Marie, made sure that all of her seven children learned how to play at least one musical instrument.[2] He attended the all-boys boarding school St. Joseph's College, which his great-grandfather Paddy Condon, an Italian immigrant and master stonemason, helped build.[1] In 1979, while they were students at St. Joseph's, he and his brothers Paul and John formed the pop group The Cockroaches.[2][3]

He was inspired by his sister Colleen to study Early Childhood Education, and became convinced that teaching preschool children "was my calling".[4] He was also attracted to the field's freedom, artistic nature, and lack of discipline, which was different from his experience in boarding school.[5] Field put off university when The Cockroaches became successful, but he was dissatisfied with touring and plagued by "perhaps irrational, but very real, feelings of inadequacy and depression".[6] By his mid-twenties, he decided that he did not want to tour any longer, so he took two breaks. His first break was as an infantry soldier, medic, and rifleman in the 5th/7th Battalion, Royal Australian Regiment, Australia's regular army from 1982 to 1985. He played the bagpipes in parades and on training missions,[7][8] but ended his military service in July 1985 and suffered from a bad back as a result of his training.[6] He also went backpacking in the U.K., listening to roots music, to children's music by artists like Raffi, and to recordings of children's books.[9]

When The Cockroaches disbanded in the early 1990s, Field enrolled at Macquarie University. While at university, he decided to record an album of children's music, enlisting the assistance of fellow student and guitarist Murray Cook, former Cockroaches roadie and vocalist Greg Page, former bandmate and keyboardist Jeff Fatt, and Macquarie instructor and composer Phillip Wilcher, who later left the group.[10]

The Wiggles recorded their first CD in 1991; it sold 100,000 copies.[11] Field worked as a preschool teacher for two years before the success of The Wiggles and their extensive touring schedule, which he strongly disliked, forced him to quit.[8][12] After the production of their second album, The Wiggles adopted colour-coded skivvies to wear on stage. According to Field, he wore blue because Cook and Fatt already owned shirts in their colours of red and purple respectively, so he and Page "met in a Sydney department store and literally raced to see who got the blue shirt".[13] Page ended up wearing a yellow skivvy and Field originally wore a green polo shirt, but changed to blue to avoid clashing with Dorothy the Dinosaur.

Each Wiggle developed a "schtick" based on their actual behaviours, which evolved into caricatures, and served the same purpose as the uniforms in differentiating their characters and making them memorable to young children; Field's was eating.[14] Field created and played the original Captain Feathersword; the role was taken over by Paul Paddick in 1993. Field also played Wags the Dog.[15] 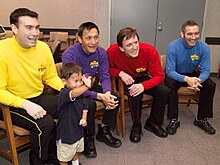 Field (on far right) with the original line-up of The Wiggles, during a trip to NASA in 2004.

By the mid-1990s, despite the success of The Wiggles, Field reported being suicidal and "frequently gripped by anxiety, sadness, and negativity".[16] By mid-2004, shortly after his marriage and the birth of his first child, Field's serious medical issues, worsened by their heavy tour schedule, caused him to consider quitting or re-inventing The Wiggles, despite their great success in the U.K. and North America. After meeting chiropractor James Stoxen in Chicago in 2004, Field improved his health to the point that he was able to continue. He began to hire teams of chiropractors for himself, his fellow bandmembers, and castmembers in every city they performed, which he credited with making it possible for them to fulfill their touring requirements.[17] In early 2013, Field became the only original member of the group to remain after Fatt, Cook, and Page retired. He remained in the group because he wanted to continue to educate children and as Wiggles manager Paul Field stated, "to placate American, British and Canadian business partners".[18]

Field's musical influences include Lightning Hopkins, Elvis Presley, and the Rolling Stones.[19] He plays several instruments, including the tin whistle, bagpipes, guitar, drums, trumpet, violin, percussion instruments and didgeridoo, and has been known to sing in a deep rich bass voice. Field, with input from the other members, produced most of the Wiggles' music, DVDs, and live shows.[18]

In 1999, Field was named "Bachelor of the Year" in Cleo Magazine. In 2003, he married Michaela Patisteas, a former dancer whose family owned Griffiths Coffee in Melbourne.[20][21] They have three children, who have joined the Field family business by appearing in several of The Wiggles' TV shows and videos.[22] Beginning in 2007, Field, who is a registered breeder of Miniature Fox Terriers,[23] did some voiceover work for the TV show "RSPCA Animal Rescue," for Channel 7 in Australia.[23][24] 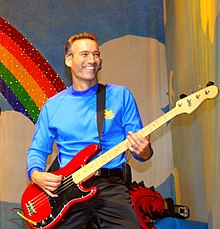 Field, in describing his enthusiasm for competitive sports, has stated, "My love of cricket is abiding", a sport that "instills the same loyalty and passions in me as I know baseball does for many in North America".[25] He is a fan of the Australian rugby league club the Wests Tigers.[26] He is also a fan of singer Julio Iglesias.[27] As Field's fitness improved, to the point that his training regimen became comparable to that of an elite athlete,[28] he gained an interest in gymnastics and acrobatics.[29]

Field went public about his experience with clinical depression in mid-2007 to draw more attention to the condition.[30][31] He has stated that "being on the road is a dangerous job for someone with depression," but has dealt with it through diet, exercise, talking about it, and having a good support system (including his father before his death in 1998,[32] his wife, and his friend Murray Cook).[8] He chronicled his health struggles and how he overcame them in his 2012 book How I Got My Wiggle Back.[33][34]

Field is a devout Catholic,[20][26] something that he reported helped him deal with his chronic health issues and depression, especially the spiritual practices of prayer and devotion to the Virgin Mary as expressed by Our Lady of Guadalupe.[35] He has two large tattoos on his arms: one is the Virgin Mary with the words "My life is in your hands" in Spanish; the other is a heart with the words, "My love, my heart" in Spanish. The names of his wife and his three children are also tattooed on his arms.[27] He admits that he got his tattoo of the Virgin, which he hid from fans for a long time, during a visit to Mexico while on tour in North America, in the middle of a bout with chronic pain and dental problems, as he put it, "in a moment of madness".[36]

Field was made a Member of the Order of Australia on 26 January 2010 "for service to the arts, particularly children's entertainment, and to the community as a benefactor and supporter of a range of charities".[37]