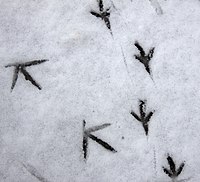 Animal track - the imprint left behind in soil, snow, mud, or other ground surfaces that an animal walks across. Animal tracks are used by hunters in tracking their prey and by naturalists to identify animals living in a given area.

Books are commonly used to identify animal tracks, which may look different based on the weight of the particular animal and the type of strata in which they are made.

Tracks can be fossilized over millions of years. It is for this reason we are able to see fossilized dinosaur tracks in some types of rock formations. These types of fossils are called trace fossils since they are a trace of an animal left behind rather than the animal itself. In paleontology, tracks often preserve as sandstone infill, forming a natural mould of the track.[1]