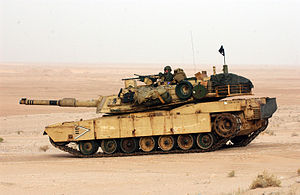 The 2003 invasion of Iraq which lasted from March 20 – May 1, 2003 resulted in a small number of American and Coalition POWs.

Most of the POWs were captured from the ambush of the 507th Maintenance Company when a convoy of vehicles from the 507th got lost and entered the Iraqi held town of Nasiriyah on March 23, 2003. The 507th was in charge of supporting actual combat troops but were not combat troops themselves and were ill equipped for fighting and quickly surrendered after all their weapons jammed. From their unit nine soldiers in the company were captured in the ambush and following soldiers surrendered to Iraqi forces:

When they surrendered they feared the worst. Miller held out little hope for mercy. "I thought they were going to kill me," he said. "That was the first thing I asked when they captured me: 'Are you going to kill me?' They said no. . . . I still didn't believe them."[1]

Soon after their capture Jessica Lynch due to her serious injuries was taken to an Iraqi hospital. The other five POWs did not know about Lynch surviving until after they were released. After their capture the five remaining members of the ambushed 507th would become famous as bloody and beaten they were interviewed by Iraq TV and the footage was shown world wide by Al Jazeera. In the interview, Private First Class Patrick Miller was asked why he came to Iraq, his reply was "I come to fix broke stuff." Asked if he came to shoot Iraqis, he answered, "No, I come to shoot only if I am shot at. They don't bother me, I don't bother them." [2]

On March 24 they were joined by Chief warrant officers David Williams, 31, and Ronald Young Jr., 26, whose Apache chopper, from the 1-227 Helicopter Attack Battalion, had been shot down in central Iraq that day.

Moved from house to house[edit]

The prisoners were taken to Baghdad, where they were isolated in separate cells of a drab prison with concrete walls and a tin roof. As American troops got closer, the soldiers were shuffled from building to building. The Iraqi captors worked feverishly to stay one step ahead of the advancing units.

As it became clear that the war was over for the Iraqis some of their captors approached a Marine unit from the 3rd Light Armored Reconnaissance Battalion, Delta Co., 3rd Platoon which was a part of Task Force Tripoli that had been pushing up toward Tikrit, Saddam Hussein's hometown. A Marine battalion was sent to check on the intelligence and found the seven POWs with a confused Iraqi guard unit whose officers had fled.

On April 13, 2003, 21 days after the 507th members were captured the Force Recon Marines burst in on the Iraqi guards who gave up without a fight. Ordering everyone on the floor a Marine gave an order to "stand up if you're American!" Given dirty prison clothes and fed little food the prisoners lost a lot of weight and with their garb, and beards they looked like Iraqis. "At first," Spc. Shoshana Johnson remembers that, "they didn't realize I was American. They said, 'Get down, get down,' and one of them said, 'No, she's American.' "[3]

Within hours, the seven were on their way to Kuwait International Airport inside a Marine Corps KC-130 transport plane, the first stop before the United States. Amid sobs, cheers and laughter, they told their stories to two reporters accompanying them on the flight. "I broke down. I was like, 'Oh my God, I'm home,'" Johnson said.[1]

During the 2003 invasion of Iraq, Iraqi Saddam Fedayeen irregular forces were involved in executing several Coalition prisoners of war.

Sergeant Donald Walters was initially reported to have been killed in the March 23 ambush of the 507th Maintenance Company. However, witnesses later reported that they had seen Walters being guarded by several Fedayeen in front of a building. Forensics work later found Walters' blood in front of the building and blood spatter suggesting he died from two gunshot wounds to the back at close range. This led the Army to conclude that Walters had been executed after being captured.[4]

Also on March 23, a British Army engineering unit made a wrong turn near the town of Az Zubayr, which was still held by Iraqi forces. The unit was ambushed and Sapper Luke Allsopp and Staff Sergeant Simon Cullingworth became separated from the rest. Both were captured and executed by Iraqi forces. In 2006, a video of Allsopp lying on the ground surrounded by Iraqi irregular forces was discovered.[5]

Marine Sergeant Fernando Padilla-Ramirez was reported missing from his supply unit after an ambush north of Nasiriyah on March 28. His body was later dragged through the streets of Ash Shatrah and hung in the town square. His body was later taken down and buried by sympathetic locals. His body was discovered by American forces on April 10.[6][7][8]