Jump to content
File:Undefined
Testing remove
This article is about the Amati family of luthiers. For the proposed automobile marque, see Mazda. For the Romanian village of Amaţi, see Păuleşti, Satu Mare.

Amati is the name of a family of Italian violin makers, who flourished at Cremona from about 1549 to 1740.

Andrea Amati (ca. 1505 – ca. 1578) was not the earliest maker of violins whose instruments still survive today. Indeed he seems more or less responsible together with Gasparo da Salò and some Micheli's like Zanetto or Pellegrino for giving the instruments of the modern violin family their definitive profile. A very small number of his instruments survive, dated between the years of 1560 and 1574 and most bearing the coat of arms of Charles IX of France. His work is marked by great elegance and an awareness of geometrical principles in design. [1]

Andrea Amati was succeeded by his sons Antonio Amati (born ca. 1550) and Girolamo Amati (1551–1635). "The Brothers Amati", as they were known, implemented far-reaching innovations in design, including the perfection of the shape of the f-holes. They are also thought to have pioneered the modern alto format of viola, in contrast to older tenor violas, but this stating is not correct since Gasparo made violas from altos of 39 to tenors of 44,7 cm.

Nicolò Amati (December 3, 1596 – April 12, 1684) was the son of Girolamo Amati. He was the most eminent of the family. He improved the model adopted by the rest of the Amatis and produced instruments capable of yielding greater power of tone. His pattern was unusually small, but he also made a wider model now known as the "Grand Amati", which have become his most sought-after violins.

Of his pupils, the most famous were Antonio Stradivari and Andrea Guarneri, the first of the Guarneri family of violin makers. (There is much controversy regarding the apprenticeship of Antonio Stradivari. While Stradivari's first known violin states that he was a pupil of Amati, the validity of his statement is questioned.)

The last maker of the family was Nicolo's son, Girolamo Amati, known as Hieronymus II (February 26, 1649 – February 21, 1740). Although he improved on the arching of his father's instruments, by and large they are inferior and no match for the greatest maker of his day, Antonio Stradivari. 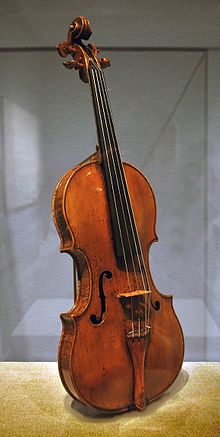 One of a group of seven Andrea Amati violins, now at the Metropolitan Museum of Art, believed to have been created in 1558, which would make it one of the earliest known violins in existence.