From Wikipedia, the free encyclopedia
Template:Taxobox/taxonomy

Aloe vera (/ˈæloʊiː/ or /ˈæloʊ/) is a succulent plant species. The species is frequently cited as being used in herbal medicine since the beginning of the first century AD. Extracts from Aloe vera are widely used in the cosmetics and alternative medicine industries, being marketed as variously having rejuvenating, healing, or soothing properties. There is, however, little scientific evidence of the effectiveness or safety of Aloe vera extracts for either cosmetic or medicinal purposes, and what positive evidence is available[3] is frequently contradicted by other studies.[4][5][6]

Aloe vera is a stemless or very short-stemmed succulent plant growing to 60–100 cm (24–39 in) tall, spreading by offsets. The leaves are thick and fleshy, green to grey-green, with some varieties showing white flecks on their upper and lower stem surfaces.[7] The margin of the leaf is serrated and has small white teeth. The flowers are produced in summer on a spike up to 90 cm (35 in) tall, each flower being pendulous, with a yellow tubular corolla 2–3 cm (0.8–1.2 in) long.[7][8] Like other Aloe species, Aloe vera forms arbuscular mycorrhiza, a symbiosis that allows the plant better access to mineral nutrients in soil.[9]

Aloe vera leaves contain phytochemicals under study for possible bioactivity, such as acetylated mannans, polymannans, anthraquinone C-glycosides, anthrones, other anthraquinones, such as emodin, and various lectins.[3][10][11] 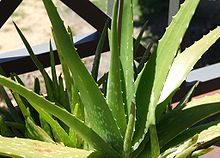 The species has a number of synonyms: A. barbadensis Mill., Aloe indica Royle, Aloe perfoliata L. var. vera and A. vulgaris Lam.[12][13] Common names include Chinese Aloe, Indian Aloe, True Aloe, Barbados Aloe, Burn Aloe, First Aid Plant.[8][14][15][16][17] The species epithet vera means "true" or "genuine".[14] Some literature identifies the white-spotted form of Aloe vera as Aloe vera var. chinensis;[18][19] however, the species varies widely with regard to leaf spots[20] and it has been suggested that the spotted form of Aloe vera may be conspecific with A. massawana.[21] The species was first described by Carl Linnaeus in 1753 as Aloe perfoliata var. vera,[22] and was described again in 1768 by Nicolaas Laurens Burman as Aloe vera in Flora Indica on 6 April and by Philip Miller as Aloe barbadensis some ten days after Burman in the Gardener's Dictionary.[23]

Techniques based on DNA comparison suggest Aloe vera is relatively closely related to Aloe perryi, a species endemic to Yemen.[24] Similar techniques, using chloroplast DNA sequence comparison and ISSR profiling have also suggested it is closely related to Aloe forbesii, Aloe inermis, Aloe scobinifolia, Aloe sinkatana, and Aloe striata.[25] With the exception of the South African species A. striata, these Aloe species are native to Socotra (Yemen), Somalia, and Sudan.[25] The lack of obvious natural populations of the species has led some authors to suggest Aloe vera may be of hybrid origin.[26]

The natural range of A. vera is unclear, as the species has been widely cultivated throughout the world. Naturalised stands of the species occur in the southern half of the Arabian Peninsula, through North Africa (Morocco, Mauritania, Egypt), as well as Sudan and neighbouring countries, along with the Canary, Cape Verde, and Madeira Islands.[12] This distribution is somewhat similar to the one of Euphorbia balsamifera, Pistacia atlantica, and a few others, suggesting that a dry sclerophyll forest once covered large areas, but has been dramatically reduced due to desertification in the Sahara, leaving these few patches isolated. Several closely related (or sometimes identical) species can be found on the two extreme sides of the Sahara: dragon trees (Dracaena) and Aeonium being two of the most representative examples.

The species was introduced to China and various parts of southern Europe in the 17th century.[27] The species is widely naturalised elsewhere, occurring in temperate and tropical regions of Australia, Barbados, Belize, Nigeria, Paraguay, Mexico and the US states of Florida, Arizona and Texas.[20][28] The actual species' distribution has been suggested to be the result of human cultivation.[21][29]

Aloe vera can be grown as an ornamental plant.

Aloe vera has been widely grown as an ornamental plant. The species is popular with modern gardeners as a putatively medicinal plant and for its interesting flowers, form, and succulence. This succulence enables the species to survive in areas of low natural rainfall, making it ideal for rockeries and other low water-use gardens.[7] The species is hardy in zones 8–11, although it is intolerant of very heavy frost or snow.[8][30] The species is relatively resistant to most insect pests, though spider mites, mealy bugs, scale insects, and aphid species may cause a decline in plant health.[31][32] In pots, the species requires well-drained, sandy potting soil and bright, sunny conditions; however, Aloe plants can burn under too much sun or shrivel when the pot does not drain the rain. The use of a good-quality commercial propagation mix or packaged "cacti and succulent mix" is recommended, as they allow good drainage.[33] Terra cotta pots are preferable as they are porous.[33] Potted plants should be allowed to completely dry prior to rewatering. When potted, aloes become crowded with "pups" growing from the sides of the "mother plant", they should be divided and repotted to allow room for further growth and help prevent pest infestations. During winter, Aloe vera may become dormant, during which little moisture is required. In areas that receive frost or snow, the species is best kept indoors or in heated glasshouses.[8] Large-scale agricultural production of Aloe vera is undertaken in Australia,[34] Bangladesh, Cuba,[35] the Dominican Republic, China, Mexico,[36] India,[37] Jamaica,[38] Kenya, Tanzania and South Africa,[39] along with the USA[40] to supply the cosmetics industry with Aloe vera gel.

This plant has gained the Royal Horticultural Society's Award of Garden Merit.[41]

Aloe vera gel being used to make a dessert

Scientific evidence for the cosmetic or therapeutic effectiveness of aloe vera is limited and frequently contradictory.[4][5] Despite this, the cosmetic and alternative medicine industries regularly make claims regarding the soothing, moisturizing, and healing properties of aloe vera[3][42] commercially advertised mainly for skin conditions such as sunburns, cold sores and frostbite. Aloe vera gel is also used commercially as an ingredient in yogurts, beverages, and some desserts,[43][44][45] although at certain doses, its toxic properties could be severe whether ingested or topically applied.[46] The same is true for aloe latex, which was taken orally for conditions ranging from glaucoma to multiple sclerosis until the FDA required manufacturers to discontinue its use.[47] Other uses for extracts of Aloe vera include the dilution of semen for the artificial fertilization of sheep,[48] as a fresh food preservative,[49] or for water conservation in small farms.[50] It has also been suggested that biofuels could be obtained from Aloe vera seeds.[51] Aloe is also used as a food substance, possibly for its gelling properties.

Aloe vera is used in traditional medicine as a multipurpose skin treatment. In Ayurvedic medicine it is called kathalai, as are extracts from agave.[52]: 196 for aloe : 117 for agave  Early records of Aloe vera use appear in the Ebers Papyrus from the 16th century BC,[17]: 18  and in Dioscorides' De Materia Medica and Pliny the Elder's Natural History - both written in the mid-first century AD.[17]: 20  It is also written of in the Juliana Anicia Codex of 512 AD.[43]: 9  The plant is used widely in the traditional herbal medicine of many countries.[3]

Aloin, a compound found in the exudate of some Aloe species, was the common ingredient in over-the-counter (OTC) laxative products in the United States until 2002 when the Food and Drug Administration banned it because the companies manufacturing it failed to provide the necessary safety data.[53][54] Aloe vera has potential toxicity, with side effects occurring at some dose levels both when ingested or applied topically.[46] Although toxicity may be less when aloin is removed by processing, Aloe vera that contains aloin in excess amounts may induce side effects.[3][6][55] A two-year National Toxicology Program (NTP) study on oral consumption of nondecolorized whole leaf extract of Aloe vera found evidence of carcinogenic activity in male and female rats. The NTP says more information is needed to determine the potential risks to humans.[56][57][58]

Aloe vera juice is marketed to support the health of the digestive system, but there is neither scientific evidence nor regulatory approval to support this claim.[59] The extracts and quantities typically used for such purposes appear to be dose-dependent for toxic effects.[46]

Aloe vera is used on facial tissues where it is promoted as a moisturiser and anti-irritant to reduce chafing of the nose. Cosmetic companies commonly add sap or other derivatives from Aloe vera to products such as makeup, tissues, moisturizers, soaps, sunscreens, incense, shaving cream, or shampoos.[43] A review of academic literature notes that its inclusion in many hygiene products is due to its "moisturizing emollient effect".[60]

In 2011, the NTP carried out a series of short- and long-term carcinogenicity studies of a nondecolorized whole leaf extract of Aloe barbadensis miller (Aloe vera) in rats and mice, in which the extracts were fed to the rodents in drinking water.[3] The studies found "clear evidence of carcinogenic activity" in the rats, but "no evidence of carcinogenic activity" in the mice. Both the mice and rats had increased amounts of noncancerous lesions in various tissues. The NTP believes further studies of oral preparations of aloe are important, as are studies of the oral exposure of humans to aloe; topical preparations are still considered safe.[3]

Oral ingestion of Aloe vera may also cause diarrhea, which in turn can lead to electrolyte imbalance, kidney dysfunction, dry mouth, headache, and nausea, while topical application may induce contact dermatitis, erythema, or phototoxicity.[3][56]

Two 2009 reviews of clinical studies determined that all were too small and faulty to allow strong conclusions to be drawn from them, but concluded, "there is some preliminary evidence to suggest that oral administration of aloe vera might be effective in reducing blood glucose in diabetic patients and in lowering blood lipid levels in hyperlipidaemia. The topical application of aloe vera does not seem to prevent radiation-induced skin damage. The evidence regarding wound healing is contradictory. More and better trial data are needed to define the clinical effectiveness of this popular herbal remedy more precisely."[6][61] One of the reviews found that Aloe has not been proven to offer protection for humans from sunburn, suntan, or other damage from the sun.[61]