The family booked first class passage on board the Titanic, bound for Montreal. Hudson, Bessie and their children, Loraine, 2, and Trevor, 11 months, boarded the ship in Southampton along with four servants: a maid, Sarah Daniels (no relation to Bessie); a nurse, Alice Cleaver[5]; a cook, Mildred Brown; and a chauffeur, George Swane. Hudson and Bessie occupied cabin C-22, Sarah Loraine occupied C-24, and Alice and Trevor occupied C-26. Two second-class cabins were also booked for Swane and Brown.

Hudson and Bessie were dining companions with Major Arthur Godfrey Peuchen. At dinner on 14 April, they brought Loraine to the dining room with them so she could see how pretty it was.

After the ship struck the iceberg, Mr. Allison left to find out what was going on. While he was gone, Alice took baby Trevor and went to get the rest of the servants in second class. Mr. Allison returned to his cabin to find Alice and Trevor gone. Hudson delivered his wife and daughter to Boat 6, and apparently left before the boat was launched. Major Peuchen recalled how Bessie and Loraine were almost rescued: 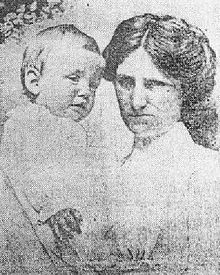 Brave Nurse and the Babe She Saved

George Swane saw Alice, Mildred and Trevor safely into Boat 11, which left the ship at around 1:45am, nearly an hour after Boat 6 had already left the ship. Varying stories claim that Alice panicked and grabbed Trevor, without informing Mrs. Allison that she was leaving, and that Mrs. Allison refused to leave the ship without her baby, though it is possible that the entire group went up to the boat deck together, and that Alice and the baby were lost in the crowd. [6]

Hudson, Bessie and Loraine Alison, as well as George Swane, were also lost in the sinking. Whether or not Swane found his employers and informed them that their son was safely off the ship is unknown, but if he did, it is likely the information came too late for any of them to leave the ship. Hudson, Bessie and Loraine was last seen on deck Smiling, Bessie was one of only four first-class women (including Ida Straus) who perished, while Loraine was the only child of first and second class to die in the disaster. Hudson Allison's body was the 135th recovered by the CS Mackay-Bennett; George Swane's was 294th. Hudson's body was brought to be buried in the family plot in Maple Ridge Cemetery near Winchester, Ontario.

Alice and Trevor were met in New York City by Hudson's brother, George, who, along with his wife, Lillian, took custody of the now-orphaned Trevor. Trevor died on August 7, 1929 at the age of 18 of food poisoning. He was buried beside his father.

What really happened to Loraine?[edit]

In 1940, a woman named Loraine Kramer claimed that she was Loraine Allison, and that at the last minute, her parents gave her up to a man named Hyde (whose identity is said to be that of shipbuilder Thomas Andrews) who raised her on a farm in the American Midwest. Her claim, however, was not accepted by the Allison family. Eventually, Ms. Kramer moved to the western United States and the Allison family never heard from her again.[7]

The Allisons in film[edit]

The Allisons were major characters in the 1996 miniseries, Titanic. Mr. Allison was portrayed by Kevin Conway, while Harley Jane Kozak played his wife, Bessie. Loraine was portrayed by Devon Hoholuk. The part of baby Trevor was uncredited. The miniseries' subplot regarding the family was highly fictionalized and filled with historical inaccuracies: for example, they added to the story of the long-standing myth that Alice Cleaver (played by Felicity Waterman) was a child murderess who stole Trevor in a fit of panic, thus forcing the Allisons to remain on the ship looking for him until it was too late. The Allisons' other servants (Sarah Daniels, Mildred Brown and George Swane) did not feature in the series - the only servant travelling with them was Alice Cleaver.