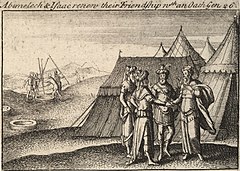 Abimelech was most prominently the name of a king of Gerar who is mentioned in two of the three wife-sister narratives in Genesis. The Haggada identifies them as separate people, the second being the first Abimelech's son, and that his original name was Benmelech ("son of the King") but changed his name to his father's. At the time of Abimelech, there was an Egyptian governor of Tyre named Abimilki. They could possibly be the same person. Abimilki's name appears on the Amarna tablets.

Abimelech's name has three main translations, though none treats the name as being completely Hebrew, and all are slightly contorted. The first is my father is king, which could be considered simply as a generic title given to a crown prince. This is supported in the Haggada when "Benmelech" son of Abimelech changes his name to Abimelech when he becomes king. The other two are more interesting, both essentially being my father is MLK, with MLK being the reference found elsewhere in the Bible in prohibitions such as do not pass your children through the fire to MLK, in which case the following possibilities arise:

Other people with this name[edit]

Apart from the kings of Gerar, the Bible also records this name for: