this is the descriptive paragraph:is a type of dental restoration that is utilized when there is inadequate tooth structure remaining to support a traditional restoration. A small rod, usually metal, is inserted into the root space of the tooth and protrudes from the root a couple of millimeters. This rod is referred to as a post. The post is then used to hold a filling, or core, in place. Without this post there would not have been enough tooth structure remaining to hold the filling required. Often times, the post and core is covered with a crown, however it does not need a crown to function.[edit]

Post and cores divide into two main groups: prefabricated and cast. Both of these systems employ a post that is placed within the root canal of the tooth being restored. Thus the tooth must first be endodontically treated. After the endodontic procedure has been completed, and the root canal(s) is/are filled with the inert gutta percha root canal filling material, some gutta percha is removed from the canal space, usually by a series of endodontic files that prepares and shapes the root canal. The space that exists coronal to the remaining gutta percha, called the post space, is now available within which to place a post. It is desirable to leave sufficient root filling material in the apical area to maintain an apical seal. This procedure does not even require local anesthesia as the tooth has long been dead after the root canal treatment and no pain is felt.

In post and core fabrication, it is desirable that the post descend at least two third of the length of root canal (or not less than the height of the crown) in order to provide sufficient retention.

Basically, it is important to leave at least 4 mm of gutta percha at the apex of the root canal, even at the expense of a longer post, because it is within the apical 4 mm of the root canal that the apical delta anastomose with the exterior surface of the root. Should these lateral canals not be blocked with the gutta percha and the cement used to place the gutta percha, the chances of microleakage and percolation of microbes are greatly increased, thereby increasing the likelihood of an endodontic failure.

It is not necessarily the length of the post within the root canal that provides for retention of the core, and thus the eventual crown, but rather the length of post that will exist within root structure that exists within surrounding bone. If the post is 16 mm long, but only extends 4 mm into root structure that is surrounded by solid bone, the restoration will have a poor prognosis. This consideration of crown-to-root ratio is essential when evaluating the tooth for a crown-lengthening procedure.

In the picture at right, the two teeth on the extreme left and right are the ones under discussion. The two teeth in the middle have been endodontically treated, but do not have post and cores. 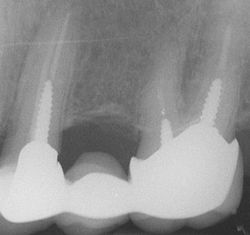 Prefabricated post and cores take less time to place, as they do not involve any lab work and can be inserted immediately upon the decision to utilize them, once the endodontic therapy has been completed and the post space cleared of gutta percha. After the prefabricated post is properly cemented into the post space, a core material, such as Dental composite, can be packed around the cemented post. After the material has been cured or has had a chance to set and properly formed into a crown preparation, an impression can be taken for the fabrication of a prosthetic crown.

In cases where the post space is not a good match for a prefabricated post, a cast post and core can be custom fabricated for the tooth. A resin pattern is produced by placing a preformed plastic "burnout" post into the post space and a resin material, such as Duralay resin, is used to build up the tooth to the proper dimensions. When this is completed, the pattern resin/plastic post is removed from the tooth structure and attached to a sprue former, much in the same way as a is done with the wax pattern of a crown, and a single-unit cast post and core can thus be fabricated out of gold, titanium or another metal using the lost-wax technique. Where a metal post could be difficult to conceal a custom post made of zirconia oxide[clarification needed] can be made, its tooth colour leaves less of a shadow under the final restoration. Alternatively, an impression can be taken of the post space and dental arch using a plastic post and a polyvinyl siloxane impression material, and this used to construct a suitable post in the dental laboratory.

There are many types of post designed available for cast post and cores, utilizing various combinations of the following properties:

In a classic case one of the best design for a post to decrease the risk of failure is the narrowest & longest smooth, parallel post that one can fit into the post space. Utilizing the longest possible post ensures that the forces transmitted from the crown are distributed over as much of the root as possible. Using the appropriate diameter post ensures that as much natural tooth structure as possible is left to support the post and absorb the transmitted forces. A parallel post ensures the greatest retention of the post within the canal, and is perhaps utilized with only the slightest loss of tooth structure to the internal wall of the canal. A smooth-surfaced post, although less retentive than either serrated or threaded post surfaces, transmits the least amount of force to the root structure. While both smooth and serrated posts are passive, in that they simply lie within the post space after being cemented, threaded posts actively engage the internal walls of the root canal as they are screwed in, and, while being the most retentive by far, produce such a force on the brittle root structure that they are contraindicated in most situations.

The use of a post and core does not strengthen the tooth prior to restoration with a crown; rather, it may contribute to the weakening of the tooth structure, as the forces placed upon the future prosthetic crown and core are now transmitted along virtually the entire length of the brittle, endodontically treated tooth. This inherent drawback is taken into account when the prognosis of the finished restoration is determined and explained to the patient prior to the onset of treatment. It is because of this increased risk of failure inherent in the use of post and core restorations that, when all of the independent failure rates of the many procedures needed for the restoration of the tooth are considered together (endodontic treatment, crown lengthening (when indicated), post and core and prosthetic crown), the patient is sometimes advised to have the tooth extracted and an implant placed.

The post with additional single-circle ring increases the contact surface area between the core and involved hard tissue of tooth significantly, therefore this system does not require a post with at least 2/3 of the root canal depth as its indication.