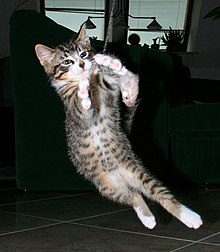 Cat chewing on a toy

Cat play and toys incorporates predatory games of "play aggression". These activities allow kittens and younger cats to grow and acquire cognitive and motor skills, and to socialize with other cats. Cat play behavior can be either solitary (with toys or other objects) or social (with animals and people).[1]

Since cats are meat-eating predators, nearly all cat games are predatory games.[2]

Prey is fearful of predators. Predators often encounter prey that attempt to escape predation. Prey that moves towards the cat with confidence may be exhibiting an aggressive defensive posture. Cats often play with toys that behave more like fearful prey trying to escape than toys that mimic a more confrontational prey.

Most cat games mimic a specific type of hunting;[3] for example, balls, fingers, sticks, and laser pointers emulate insects, while rope or string may emulate a snake.[dubious – discuss]

Success rate is important in play. A cat that catches its prey every time soon gets bored, and a cat that never gets it just loses interest. The ideal hunting success rate is around 1 in 3 to 1 in 6. Capturing prey at this rate generally maximises a cat's interest in the game.[4]

Play is about predation, and a highly excited cat can cause minor injuries in the excitement of the moment. With most cats, it is wise to keep playthings at least 20 cm (8") away from fingers or eyes, and avoid encouraging a cat to eat inedible toys. If playing with the bare hands, a cat will generally resist using its claws or biting too hard, but a cat that becomes extremely excited may accidentally inflict injuries to its human playmate in the form of light scratches or small puncture wounds from biting too hard. Cats claws and mouth can contain bacteria that can lead to infection, so it is wise to clean and treat any wounds with an antiseptic solution and seek professional medical services if there is belief that the wound has become infected.

Catching and eating are two closely related but separate activities. Domestic cats often store caught food for eating later. Eating happens when the game is over, so incorporating food into hunting games tends to end the interest in play.