Jump to content
For other uses, see Aardwolf (disambiguation).

The aardwolf (Proteles cristata) is a small, insectivorous mammal, native to East Africa and Southern Africa. Its name means "earth wolf" in the Afrikaans / Dutch language.[3] It is also called "maanhaar jackal"[4] (Literally "mane jackal" in Afrikaans) or civet hyena, based on the secretions (civet) from their anal glands.[5] The aardwolf is in the same family as the hyenas. Unlike many of its relatives in the order Carnivora, the aardwolf does not hunt large animals, or even eat meat on a regular basis; instead it eats insects, mainly termites – one aardwolf can eat about 250,000 termites during a single night by using its long, sticky tongue to capture them.[6] The aardwolf lives in the scrublands of eastern and southern Africa – these are open lands covered with stunted trees and shrubs. The aardwolf is nocturnal, resting in burrows during the day and emerging at night to seek food. Their diet consists mainly of termites, and insect larvae.[7]

The aardwolf is the only surviving species in the mammalian subfamily Protelinae. There is disagreement as to whether there are any subspecies or if the species is monotypic. Some sources say that there are two subspecies, Proteles cristatus cristatus of Southern Africa and Proteles cristatus septentrionalis of East Africa,[5][8] whereas others say it is monotypic.[9] Recent studies have shown that the aardwolf probably broke away from the rest of the hyena family early on; however, how early is still unclear as the fossil record and the genetic studies differ by 10 million years.[10][nb 2]

The aardwolf is generally classified with the Hyaenidae, though it was formerly placed into the family Protelidae.[nb 3] Early on, scientists felt that it was merely mimicking the striped hyena, which subsequently led to the creation of the Hyaenidae family.[12]

The genus name proteles comes from two words both of Greek origin, protos and teleos which combined means "complete in front" based on the fact that they have five toes on their front feet and four on the rear.[5] The species name, cristatus comes from Latin and means "provided with a comb", relating to their mane.[5] 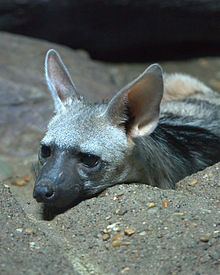 Detail of head – taken at the Cincinnati Zoo. Note the ability to rotate the ears.

The aardwolf resembles a very thin striped hyena, but with a more slender muzzle, black vertical stripes on a coat of yellowish fur, and a long, distinct mane down the midline of the neck and back. They also have one or two diagonal stripes down the fore and hindquarters, along with several stripes on its legs.[8] The mane is raised during confrontations in order to make the aardwolves appear larger. It is missing the throat spot that others in the family have.[5] Its lower leg (from the knee down) is all black, and its tail is bushy with a black tip.[11] The aardwolf is about 55 to 80 centimetres (22 to 31 in) long, excluding its bushy tail, which is about 20–30 centimetres (7.9–11.8 in) long,[3][11] and stands about 40 to 50 centimetres (16 to 20 in) tall at the shoulders.[13] An adult aardwolf weighs approximately 7–10 kilograms (15–22 lb), sometimes reaching 15 kilograms (33 lb).[5] The aardwolfs in the south of the continent tend to be smaller (about 10 kilograms (22 lb)), whereas the eastern version weighs more (around 14 kilograms (31 lb)).[8] The front feet have five toes each, unlike the four-toed hyena.[3][14] The teeth and skull are similar to those of the hyena, though smaller,[13] and its cheek teeth are specialised for eating insects.[3] It does still have canines; however, unlike the hyena, these teeth are used primarily for fighting and defense.[11] Its ears, which are large,[11] are very similar to the Striped Hyena.[5]

Aardwolves live in open, dry plains and bushland, avoiding mountainous areas.[11] Due to their specific food requirements, they are only found in regions where termites of the family Hodotermitidae occur. Termites of this family depend on dead and withered grass and are most populous in heavily grazed grasslands and savannahs, including farmland. For most of the year, aardwolves spend time in shared territories consisting of up to a dozen dens, which are occupied for six weeks at a time.[7]

There are two distinct populations: one in Southern Africa, and another in East and Northeast Africa. The species does not occur in the intermediary miombo forests. 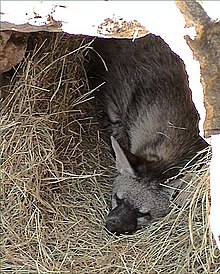 Aardwolf at the San Antonio Zoo

Aardwolves are shy and nocturnal, sleeping in underground burrows by day.[3] They will, on occasion during the winter, become diurnal feeders. This happens during the coldest periods as they then stay in at night to conserve heat.[16]

They have often been mistaken for solitary animals. In fact, they live as monogamous pairs with their young.[17] If their territory is infringed upon, they will chase the intruder up to 400 metres (1,300 ft) or to the border.[15] If the intruder is caught, which rarely happens,[15] a fight will occur, which is accompanied by soft clucking,[18] hoarse barking, and a type of roar.[19] The majority of incursions occur during mating season, when they can occur 1–2 times per week.[19] When food is scarce the stringent territorial system may be abandoned and as many as three pairs may occupy a "single territory."[19]

An aardwolf pair may have up to ten dens, and numerous middens, within their territory. When they deposit feces at their middens, they dig a small hole and then cover it with sand. Their dens are usually abandoned aardvark, springhare, or porcupine dens,[18] or on occasion they are crevices in rocks. They will also dig their own dens, or enlarge dens started by springhares.[19] They typically will only use one or two dens at a time, rotating through all of their dens every six months. During the summer, they may rest outside their den during the night, and sleep underground during the heat of the day.

The aardwolf feeds primarily on termites and more specifically on Trinervitermes.[6] This genus of termites has different species throughout the aardwolfs range. In East Africa, they eat Trinervitermes bettonianus, and in central Africa they eat Trinervitermes rhodesiensis, and finally in southern Africa, they eat Trinervitermes trinervoides.[3][6][19] Their technique consists of licking them off the ground as opposed to the aardvark which will dig into the mound.[16] They locate their food by sound and also from the scent secreted by the soldier termites.[19] An aardwolf may consume up to 250,000 termites per night using its sticky, long tongue.[6][7] They do not destroy the termite mound or consume the entire colony, thus ensuring that the termites can rebuild and provide a continuous supply of food. They will often memorize the location of such nests and return to them every few months.[18] During certain seasonal events, such as the onset of the rainy season and the cold of mid-winter, the primary termites become scarce and so the need for other forms of sustenance becomes pronounced. During these times, the southern aardwolf will seek out Hodotermes mossambicus, a type of harvester termite,[19] a termite active in the afternoon, which explains some of their diurnal behavior in the winter.[6] The eastern aardwolf will, during the rainy season, get variety by subsisting on termites from the Odontotermes and Macrotermes genera.[6] They are also known to feed on other insects, larvae, eggs and, some sources say, occasionally small mammals and birds, but these constitute a very small percentage of their total diet.[19] Unlike other hyenas, aardwolves do not scavenge or kill larger animals.[11][18] Contrary to popular myths, aardwolfs do not eat carrion, and if they are seen eating while hunched over a dead carcass, it is actually eating larvae and beetles.[11] Also, contrary to some sources, they do not like meat, unless it is finely ground or cooked for them.[11] The adult aardwolf was formerly assumed to forage in small groups,[13] however, more recent research has shown that they are primarily solitary foragers,[17] necessary because of the scarcity of their insect prey. Their primary source, Trinervitermes, forages in small but dense patches of 25–100 centimetres (9.8–39.4 in).[19] While foraging, the aardwolf will cover about 1 kilometre (0.62 mi) per hour, which translates to 8–12 kilometres (5.0–7.5 mi) per summer night and 3–8 kilometres (1.9–5.0 mi) per winter night.[11]

The breeding season varies depending on their location, but normally takes place during autumn or spring. In South Africa, breeding occurs in early July.[15] During the breeding season, unpaired male aardwolves will search their own territory, as well as others, for a female to mate with. Dominant males will also mate opportunistically with the females of less dominant neighboring aardwolves,[15] which can result in conflict between rival males.[5] Dominant males will even go a step further and as the breeding season approaches, they will make increasingly greater and greater incursions onto weaker males' territories. As the female comes into oestrus, they will add pasting to their tricks inside of the other territories, sometimes doing so more in rivals' territories than their own.[15] Females will also, when given the opportunity, mate with the dominant male, which will increase the chances of the dominat male guarding "his" cubs with her.[15] Gestation lasts between 89 and 92 days,[5][15] producing two to five cubs (most often two or three) during the rainy season (Nov–Dec),[13] when termites are more active.[3] They are born with their eyes open but initially are helpless,[19] and weigh around 200–350 grams (7.1–12.3 oz).[5] The first six to eight weeks are spent in the den with their parents.[18] The male may spend up to six hours a night watching over the cubs while the mother is out looking for food.[15][19] After three months, they begin supervised foraging and by four months are normally independent, though they will often share a den with their mother until the next breeding season.[18] By the time the next set of cubs is born, the older cubs have moved on.[15] Aardwolves generally achieve sexual maturity at one and a half to two years of age.[5]

The aardwolf has not seen decreasing numbers and they are relatively widespread throughout eastern Africa. They are not common throughout their range, as they maintain a density of no more than 1 per square kilometer, if the food is good. Because of these factors, the IUCN has rated the aardwolf as least concern.[1] In some areas, they are persecuted by man because of the mistaken belief that they prey on livestock; however, they are actually beneficial to the farmers because they eat termites that are detrimental.[19] In other areas, the farmers have recognized this, but they are still killed, on occasion, for their fur. Dogs and insecticides[1] are also common killers of the aardwolf.[18]

Aardwolfs are common sights at zoos. Frankfurt Zoo in Germany was home to the oldest recorded aardwolf in captivity at 18 years and 11 months.[11]